Founder and CEO of Cross Technologies, Inventor of the Yellowjacket technology

Implodes after his suit is sabotaged by Scott

"You tried to hide your suit from me, now, it's gonna blow up in your face, and destroy everyone you care about."
"Imagine a soldier the size of an insect, the ultimate secret weapon..."
"Do I look like a monster?"

“You think you can stop the future?! You're just a thief!”
―Darren Cross to Scott Lang

Darren Cross (also known as Yellowjacket) is the CEO of Cross Technological Enterprises, and the main antagonist in the 2015 Marvel Studios film, Ant-Man. He is portrayed by Corey Stoll.

Darren Cross graduated from MIT as valedictorian at the age of twenty. He was hired directly from MIT by Hank Pym, and for a time worked as his assistant. However, he became obsessed with learning the secrets of Pym's Ant-Man Suit, and his size-reducing Pym Particle technology. At some point, he forced Pym from his company, Pym Technologies, and took over as CEO, renaming it Cross Technologies.

Cross sought out the guest who questioned him in the Pym Technologies bathroom, where he presented himself as friendly and understanding, handing over a paper towel for the man to wash his hands. However when the man continued to question Cross' work, Cross shot him with a gun containing the unstable Pym Particles, causing his body to shirk and collapse into itself, leaving a tiny bloody mess on the floor. Cross wiped away the mess and flushed it down the toilet.

Viewing the presentation to have been a success, Cross invited Hope van Dyne out to dinner with him to celebrate. There they toasted to Cross' impressive success with finally completing his experiments and van Dyne told him he deserved all his success.

In the film, Darren shows Hank his new project: a weaponized version of the Ant-Man Suit codenamed the Yellowjacket. Which he wants to spread around the world to revolutionize the future of warfare. However, he has yet to replicate the Ant-Man's Pym Particle technology into the prototype so that it's safe for human use. Hank, horrified at the danger the new suit poses, chooses prisoner Scott Lang to become the new Ant-Man and steal the Yellowjacket from Darren before it is unveiled to the world.

Eventually, Darren finally duplicates the Pym Particle technology, albeit an imperfect version, into the Yellowjacket and invites Pym to the unveiling ceremony. When Ant-Man breaks into Cross Technologies and attempts to steal the suit, he is instead captured by Darren, who reveals he knew about their plan and intends to sell both the Yellowjacket and Ant-Man suits to HYDRA. He then betrays Hank and shoots him near the neck; but Hank survives. When Ant-Man breaks out of the trap, Darren attempts to escape in a helicopter with the Yellowjacket; but Ant-Man follows him as Cross Technologies and it's research is destroyed by bombs planted by Ant-Man earlier.

With no alternative, Darren dons the Yellowjacket suit and fights Ant-Man before they crash into a house and Ant-Man is arrested by Paxton. Enraged at Scott for losing his company and driven insane by the imperfect shrinking formula, Darren arrives at Scott's home and attempts to kill his daughter, but is stopped by Ant-Man and Paxton. Darren prepares to kill both Paxton and Scott's daughter, but Ant-Man defeats him by shrinking to subatomic size and sabotaging the wiring in the Yellowjacket suit, causing Darren to shrink uncontrollably until he implodes. 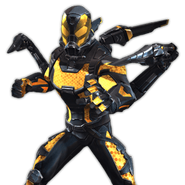 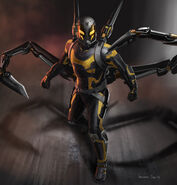 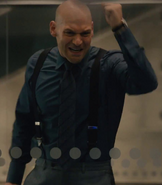 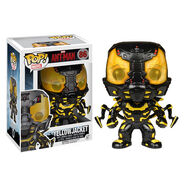 Retrieved from "https://disney.fandom.com/wiki/Darren_Cross?oldid=4199113"
Community content is available under CC-BY-SA unless otherwise noted.