Neil Young 2018-present
Daryl Christine Hannah is an American film actress. She is known for playing Nancy Archer in the 1993 remake of Attack of the 50 Foot Woman, as well as her Saturn Award winning role as Elle Driver in Quentin Tarantino's two-part film Kill Bill. She also played the role of Pris in the film, Blade Runner.

For Disney, she played Madison in the 1984 Touchstone Pictures film, Splash, Leann Netherwood in The Tie That Binds, Liz Kerner in Two Much, Lizzie in My Favorite Martian, herself along with her sister, Page, in episode 212 of Muppets Tonight, and the 1991 TV documentary, The Best of Disney: 50 Years of Magic. 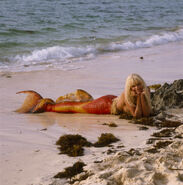 Lizzie
(My Favorite Martian)
Add a photo to this gallery

Daryl with her sister Page, Sal Minella, and Johnny Fiama on Muppets Tonight.

Daryl Hannah speaks onstage during the Sense8 panel during the 2015 Summer TCA Tour.
Add a photo to this gallery
Retrieved from "https://disney.fandom.com/wiki/Daryl_Hannah?oldid=3868208"
Community content is available under CC-BY-SA unless otherwise noted.