Keilani and Athena
David Michael "Dave" Bautista, Jr. is a Greek-Filipino-American mixed martial artist, bodybuilder, actor, and former professional wrestler who is best known for his time in WWE, where he performed under the ring name Batista and became a six-time world champion. 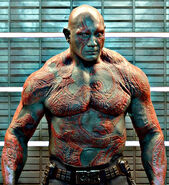 Dave Bautista at Guardians of the Galaxy premiere in July 2014.

Dave Bautista attending the 2019 MTV Movie & TV Awards.
Add a photo to this gallery
Retrieved from "https://disney.fandom.com/wiki/Dave_Bautista?oldid=3978742"
Community content is available under CC-BY-SA unless otherwise noted.