1997-present
David Christopher "Dave" Filoni is an American film director, voice actor, writer, and animator. He is best known for working as a supervising director on the animated series Star Wars: The Clone Wars, along with providing the voice of the bounty hunter Embo and other minor characters.

He also worked as a storyboard artist for the Disney Channel shows Kim Possible and American Dragon: Jake Long.

He also worked as a supervising director and executive producer on the animated series Star Wars Rebels. He also provided voices for Chopper, Stormtroopers, and other minor characters in the series.

He currently produces The Mandalorian and directed episodes of that series. He also made a cameo as an X-Wing Pilot in Episode Six. 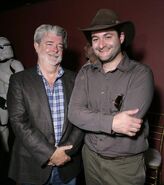 Dave Filoni during an interview of Star Wars Rebels. 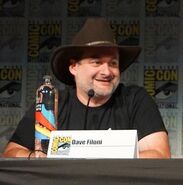 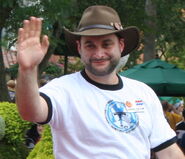 Dave Filoni at the Star Wars Weekends in June 2015. 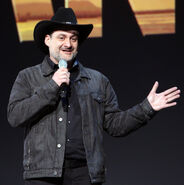 Dave Filoni speaks onstage at the The Mandalorian panel at the 2019 D23 Expo.
Add a photo to this gallery
Retrieved from "https://disney.fandom.com/wiki/Dave_Filoni?oldid=4092746"
Community content is available under CC-BY-SA unless otherwise noted.