Debra Freeman
David Charles "Dave" Goelz is an American puppeteer, puppet builder, and voice actor who has been one of the lead Muppet performers for over 40 years, performing Gonzo, Zoot, Dr. Bunsen Honeydew, Beauregard, and several other Muppet characters, as well as succeeding the role of Waldorf from Jim Henson.

His non-Disney Henson credits include Fraggle Rock (as Boober Fraggle, Uncle Travelling Matt, Philo, and others), The Animal Show (as Stinky the Skunk), and The Secret Life of Toys (as Rugby the Tiger).

Goelz is also the current voice of Figment at Epcot's Imagination pavilion and voiced Subconscious Guard Frank in Disney/Pixar's Inside Out.

In addition, he was the original puppeteer operator of Earl Sinclair's head in Dinosaurs from Season 1 to Season 2 episode, "When Food Goes Bad".

Subconscious Guard Frank
(Inside Out) 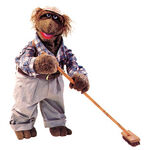