4
David William "Dave" Thomas is a Canadian-American actor, voice actor, comedian, and television writer. He is best known for portraying Doug McKenzie on SCTV as well as in the films Bob & Doug and Strange Brew, which he also directed, and as Sam Sleaze in the 1985 film, Sesame Street Presents: Follow That Bird.

His Disney roles include Tuke in Brother Bear and its sequel, General Ross in The Incredible Hulk: Ultimate Destruction, Uncle Tug in the Even Stevens episode "Little Mr. Sacktown", Hugo in The Legend of Tarzan, and additional voices in Raw Toonage. 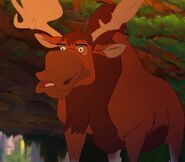 Hugo
(The Legend of Tarzan)
Add a photo to this gallery

Dave Thomas with his wife, Kimberly Ann premiere of Grown Ups in June 2010.

Dave Thomas and Rick Moranis as the McKenzie brothers in Strange Brew.

Dave Thomas and Rick Moranis behind the scenes of Brother Bear.

Dave Thomas and Rick Moranis (center) with (L-R) director Bob Walker, producer Chuck Williams, and director Aaron Blaise behind the scenes of Brother Bear.
Add a photo to this gallery
Retrieved from "https://disney.fandom.com/wiki/Dave_Thomas?oldid=4063455"
Community content is available under CC-BY-SA unless otherwise noted.