Luisa Danbi Grier-Kim
David Alan Grier is an American actor, voice actor, and comedian. He is best known for starring in the sketch comedy sitcom In Living Color.

His Disney roles include Uncle Henry in The Muppets' Wizard of Oz, Fred Ostoff in In the Army Now, Dan Anderson in A Saintly Switch, Bob Bugler in Angels in the Infield, and voiced Tubunch in the Buzz Lightyear of Star Command episode; "Stress Test", Rudd Rhymez in Randy Cunningham: 9th Grade Ninja, and Memnon in the Hercules episode; "Hercules and the Living Legend". He also voiced Reuben Parker in The Proud Family episode; "Behind the Family Lines". 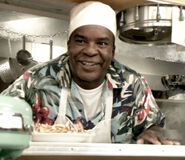 Reuben Parker
(The Proud Family)
Add a photo to this gallery