Katie and Beau
David Bruce Cassidy was an American actor, singer, songwriter, and guitarist. He was known for his role as Keith Partridge, the son of Shirley Partridge (played by his stepmother Shirley Jones), in the 1970s musical-sitcom The Partridge Family, which led to his becoming one of popular culture's teen idols and pop singers of the 1970s. He later had a career in both acting and music.

For Disney, he voiced Roland Pond in the Kim Possible episode "Oh Boyz", and his song "Cherish" was featured in The Castle.

The Theme from the Partridge Family was heard in An Extremely Goofy Movie.

Roland Pond
(Kim Possible)
Add a photo to this gallery 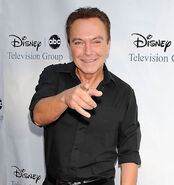 Retrieved from "https://disney.fandom.com/wiki/David_Cassidy?oldid=4123861"
Community content is available under CC-BY-SA unless otherwise noted.