He is best remembered for his role as detective John Bosley on the television series Charlie's Angels, appearing in all 110 episodes of the series (1976-81) along with original cast member Jaclyn Smith and an all-girl cast. He also lent his distinctive raspy voice to the character Grandpa Lou Pickles on the Nickelodeon animated television series Rugrats until his death. Since then, Joe Alaskey assumed the role of Grandpa Lou. Doyle made a number of appearances as a guest on the game show Match Game in the late 1970s and early 1980s, more often than not giving bizarre answers that seldom matched the contestants. He usually sat in the top row next to Brett Somers and Charles Nelson Reilly. He appeared on one week of Password Plus in 1980, three weeks of Super Password, and appeared on Tattletales with his wife Anne in 1982. 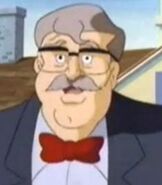 Sam Delaney
Add a photo to this gallery
Retrieved from "https://disney.fandom.com/wiki/David_Doyle?oldid=3021634"
Community content is available under CC-BY-SA unless otherwise noted.