2
David Clayton Henrie is an American actor, television writer, and producer. He starred in films, such as Grown Ups 2 and Cardboard Boxer.

In addition, he appeared in a film not made by Disney, but about Disney, entitled Walt Before Mickey, where he played Rudolf Ising. 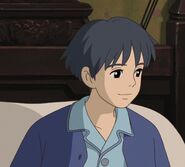 Shawn
(The Secret World of Arrietty; Disney dub, US)