Brian Hargrove (2008-present)
David Hyde Pierce is an American actor, voice actor, and comedian who is best known for his role as Dr. Niles Crane on the NBC sitcom Frasier and Henry Newman in the 2001 comedy Wet Hot American Summer. He also voiced Drix in the 2001 Warner Bros animated/live-action hybrid film, Osmosis Jones.

His Disney roles include Slim in Disney/Pixar's A Bug's Life, Daedalus in Hercules: The Animated Series, Baron Von Licktenstamp in Mighty Ducks, Dr. Doppler in Treasure Planet, and John Dean in the Hollywood Pictures film, Nixon. 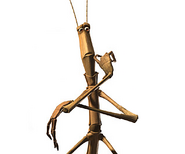 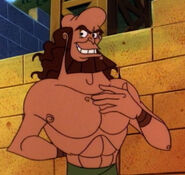 David Hyde Pierce behind the scenes of A Bug's Life. 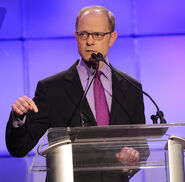 David Hyde Pierce and Danny DeVito at the 71st annual Tony Awards in June 2017.
Add a photo to this gallery
Retrieved from "https://disney.fandom.com/wiki/David_Hyde_Pierce?oldid=3764936"
Community content is available under CC-BY-SA unless otherwise noted.