Pemma Mae and Jonas
David Krumholtz is an American actor, voice actor, comedian, and producer. He is best known for his role as Charlie Eppes in the CBS drama series NUMB3RS and Seth Goldstein in the Harold & Kumar franchise. He also voiced Kareem Abdul Lavash in the R-rated computer animated film, Sausage Party. 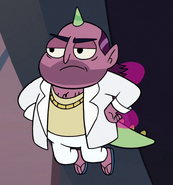 Cobalt Ferrero
(Star vs. the Forces of Evil)
Add a photo to this gallery

David Krumholtz speaks onstage during the Gigi Does It panel at the Summer 2015 TCA Tour.

David Krumholtz attending the 2019 Tribeca Film Fest.
Add a photo to this gallery
Retrieved from "https://disney.fandom.com/wiki/David_Krumholtz?oldid=4055801"
Community content is available under CC-BY-SA unless otherwise noted.