David Jr., James Graham (with Rollo), and 2 others (adopted)
James David Graham Niven was a British actor, who played Priory in Candleshoe and J.W. Osborne in No Deposit, No Return.

Born in London, Niven attended Heatherdown Preparatory School and Stowe School before gaining a place at the Royal Military College, Sandhurst. He joined the British Army and was commissioned as a second lieutenant in the Highland Light Infantry. Upon developing an interest in acting he found a role as an extra in the British film, There Goes the Bride. After resigning from his commission, Niven travelled to North America where he gained small parts in films before gaining a leading role in The Dawn Patrol.

Niven soon found success in films, like Dodsworth, The Charge of the Light Brigade, The Prisoner of Zenda, A Matter of Life and Death, The Bishop's Wife, Enchantment, The Elusive Pimpernel, The Toast of New Orleans, Happy Go Lovely, Happy Ever After, The King's Thief, Carrington V.C., Around the World in 80 Days, Casino Royale, The Moon is Blue, My Man Godfrey, The Guns of Navarone, Murder By Death, and Separate Tables, for which he won the Academy Award for Best Actor.

One of his most known roles is that of Sir Charles Lytton ("the Phantom") in Blake Edwards' The Pink Panther. In 1982, he reprised the role for Trail of the Pink Panther and Curse of the Pink Panther, for which his voice was dubbed by voice artist Rich Little due Niven being in poor health at the time.

He also began writing books with considerable commercial success one of which was his autobiography, The Moon's Balloon. He recorded an audio recording for it and wrote a follow-up Bring on the Empty Horses. 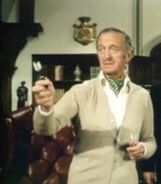 J.W. Osborne (No Deposit, No Return)
Community content is available under CC-BY-SA unless otherwise noted.
Advertisement