Disney Wiki
Register
Don't have an account?
Sign In
Advertisement
in: Article of the week, People, Voice actors,
and 44 more
English

1971-2018
David Allen Ogden Stiers was an American actor, voice artist, and conductor. He is best known for his roles in Disney films: M*A*S*H as Major Charles Emerson Winchester III, and The Dead Zone as Reverend Gene Purdy. He is also known for the role of District Attorney Michael Reston in the Perry Mason television films and voicing Mr. Maellard in Cartoon Network's Regular Show.

Stiers voiced Cogsworth and the opening narrator in Beauty and the Beast, Governor Ratcliffe and Wiggins in Pocahontas, Fenton Q. Harcourt in Atlantis: The Lost Empire, Mr. Jolly in Teacher's Pet, Jumba Jookiba in the Lilo & Stitch franchise, Kamaji in the English dub of Spirited Away, Mr. Piccolo in the English dub of Porco Rosso, and the Archdeacon in The Hunchback of Notre Dame. He also voiced the Narrator in My Neighbors the Yamadas. Additionally, he played Ken Bradfield in Everyone Says I Love You.

Stiers has also narrated several Winnie the Pooh stories. He was the narrator in the American Dragon: Jake Long episode "The Talented Mr. Long". In addition, he portrayed J.W. Harper in Iron Will, Alexei Jovanovic in Jungle 2 Jungle, Laius in Mighty Aphrodite, Judge Justin Beach in Bad Company, and Henry Spivey in Krippendorf's Tribe. He also voiced the King and the Prime Minister in The Cat That Looked at a King.

Archdeacon
(The Hunchback of Notre Dame) 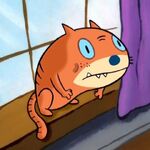 The King
(The Cat That Looked at a King) 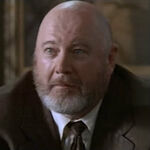 David Ogden Stiers behind the scenes of Beauty and the Beast.

David Ogden Stiers behind the scenes of Pocahontas.

David Ogden Stiers at the Atlantis: The Lost Empire premiere in June 2001.

David Ogden Stiers behind the scenes of Lilo & Stitch.

David Ogden Stiers at the Teacher's Pet premiere in January 2004.