4
David Oyetokunbo Oyelowo is a British-American actor and producer, who has appeared in many different films and television shows.

For Disney, he voiced Agent Kallus in the Disney XD animated series Star Wars Rebels, and Scar in the second season of The Lion Guard (replacing Jeremy Irons).[1]. He also played Robert Katende in The Queen of Katwe, It in A Wrinkle in Time, Preacher Green in The Help, and Ira Clark in Lincoln.

It
(A Wrinkle in Time) 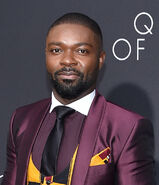 David Oyelowo at the premiere of Queen of Katwe in September 2016.

David Oyelowo at the 2019 Sundance Film Fest.
Add a photo to this gallery

Retrieved from "https://disney.fandom.com/wiki/David_Oyelowo?oldid=4043971"
Community content is available under CC-BY-SA unless otherwise noted.