1994-present
David Sobolov is a Canadian voice actor and director. He is known for his voice over work in video games, movies, and TV shows.

For Disney, Sobolov voices Drax the Destroyer in Guardians of the Galaxy, Ultimate Spider-Man, Avengers Assemble, and Hulk and the Agents of S.M.A.S.H.. He also voices The Annihilator on Disney XD's live-action series Mighty Med and Garish in the Disney Junior animated series Sofia the First. 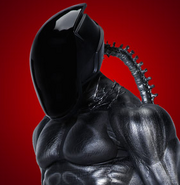 The Annihilator
(Mighty Med)
Add a photo to this gallery

Retrieved from "https://disney.fandom.com/wiki/David_Sobolov?oldid=3691186"
Community content is available under CC-BY-SA unless otherwise noted.