David Jr., William, Henry, and James
David Cecil MacAlister Tomlinson was an English film actor, who is best known for playing the role of George Banks in the 1964 Disney classic, Mary Poppins. He also voiced several cartoon characters in that film. He later portrayed Professor Browne in Bedknobs and Broomsticks and the villainous Peter Thorndyke in The Love Bug. He was considered to voice Bagheera in the film, The Jungle Book.

Outside of Disney, Tomlinson appeared as a leading man and character actor in films, such as My Brother's Keeper, Warning to Wantons, The Wooden Horse, The Magic Box, Castle in the Air, Made in Heaven, Follow That Horse!, Tom Jones, Wombling Free, The Water Babies, and The Fiendish Plot of Dr. Fu Manchu. In 1980, he retired from acting to spend time with his family until his death in 2000.

He was posthumously inducted as a Disney Legend in 2002. 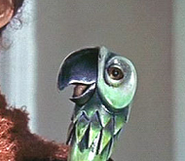 The names of the 2002 Disney Legend inductees at Disneyland Paris (David Tomlinson included)
Community content is available under CC-BY-SA unless otherwise noted.
Advertisement