Making a living, fine art, his family, his son safe

David Xanatos is a major character from Disney's Gargoyles. The secondary antagonist of the series, Xanatos is directly responsible for the reawakening of the gargoyles.

Born to Petros Xanatos a fisherman from Maine. At a young age he received a letter containing a coin from the 10th century. Being worth $20,000 he sold the coin and invested the money into various stocks and founded Xanatos Enterprises. Due to his father's belief that his fortune was unearned, their relationship became strained.

Xanatos's holdings include Xanatos Enterprises, a genetics company Gen-U-Tech, the Scarab Corporation robotics firm, and the television franchise Pack Media Studios. Despite his father's belief that Xanatos did not deserve the gift that had launched his career, Xanatos continued to claim that he would one day prove himself a self-made man.

Xanatos learned of Castle Wyvern from Demona, the only remaining Gargoyle from the Wyvern Clan, and proceeded to purchase the castle and transport it, brick by brick, and reconstruct it atop his New York skyscraper, the Eyrie Building. With the castle "above the clouds," Xanatos successfully released the survivors of the Wyvern Clan from their frozen sleep.

Xanatos initially posed as the Gargoyles' friend, convincing them to "acquire" technology from his rival Cyberbiotics for him and ultimately attempting to destroy the gargoyles once their replacements, the Steel Clan, came online. The Steel Clan was defeated, however, and Xanatos was convicted for receiving stolen property. Xanatos continued to plot against the gargoyles from prison, testing them and attempting to remove them from the castle. Upon his release, he became one of their greatest enemies, engaging in a particularly fierce rivalry with their leader, Goliath.

Xanatos also committed himself to getting his own clan of gargoyles that would be loyal and obedient to him. To that end, he tried several attempts throughout the series to do that such as resurrecting Goliath's brother, Coldstone, from the smashed bodies of three dead gargoyles from the Scottish clan; genetically creating his own clan of mutant gargoyles, one of whom was Elisa Maza's brother, Derek Maza; creating a clone of Goliath, and perfecting the Steel Clan. When these attempts failed, he changed focus to continuing his quest for immortality but by using sorcery, magic, and even involving himself with Children of Oberon, the King of the mystical island Avalon, instead.

Cunning and ruthless in the world of business, Xanatos is a master planner, even letting supposed failures further his various goals. He at first tried teaming up with Demona to control them with his Steel Clan but was forced to end their partnership when she double-crossed him.

Despite these setbacks, Xanatos makes a point to never take them personally since he considers pursuing revenge foolish and beneath him. In fact, Xanatos rarely fails completely in his schemes considering he is notorious for complex plans that often produce desired results in some aspect regardless of the opposition.

After marrying Fox, the leader of the Pack, Xanatos had become less interested in the gargoyles and more interested in finding immortality for himself and his wife. However, all his futile attempts ended in vain. He displays an odd sense of choice, given he would take a lifetime of servitude from Owen over a magic wish from his alter-ego Puck. (Xanatos saw having a life-long loyal right-hand man much more beneficial than taking a shortcut to achieve his goal of immortality, which he was confident of achieving through other means anyway; in short, he values loyalty immediately before anything else.)

In the three-part episode "Hunter's Moon", when the Clock Tower was destroyed by the Hunters and the gargoyles subsequently trapped by the Gargoyle Taskforce at Saint Damien's Cathedral, Xanatos rescued Goliath's clan and offered them to reinstate in their old home in the castle, for saving the world and his son from the attempted genocide by Demona during Hunter's Moon, with "no catch, no plot, no strings". The feud was over.

Xanatos normally dresses in a casual black suit, but in his early scuffles with the gargoyles, he would don a red exo-frame modeled after Goliath that was part of the robotic Steel Clan he used during battle against the gargoyles. He has a short beard and ties his brown hair in a loose ponytail.

Since the birth of his son, Xanatos found a reason to stay out of shady business. 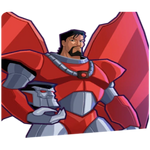