Killed in action during the Battle of the Alamo

John, William, and Margaret (with Polly)
Robert, Rebecca, and Matilda (with Elizabeth)

“Always be sure you're right, then go ahead.”
―Davy Crockett

Colonel David 'Davy' Crockett was a famous 19th century American folk hero. A frontiersman during his lifetime, he was also a soldier fighting in the Creek War under Andrew Jackson, serving as a congressman, and finally dying at the Battle of the Alamo in Texas, leading a rebel force against Mexico in the Texas Revolution.

The Crockett legend was again popularized by Walt Disney, who produced a three-episode television series loosely based on his life, starring Fess Parker in the title role: Davy Crockett, Indian Fighter; Davy Crockett Goes to Congress; and Davy Crockett at the Alamo.

The shows aired on the ABC network on the Wednesdays of December 15, 1954; January 26, 1955; and February 23, 1955. Buddy Ebsen co-starred as his friend George E. Russel, who had actually only accompanied Crockett during the Creek Indian War.

Davy Crockett made a return with Disney in two further adventures: Davy Crockett's Keelboat Race and Davy Crockett and the River Pirates. In these two episodes Crockett faced off against Mike Fink, another early American legend. The series spawned a revival in popularity and fascination with the legendary Crockett, especially among children.

The King of the Wild Frontier

In the late 1980s, Disney would revisit Davy Crockett on television with a series of television films starring Tim Dunigan as Davy Crockett with Johnny Cash playing an older Davy in one of them.

He was also played by Billy Bob Thornton in the 2004 Touchstone Pictures film The Alamo.

A character inferred to be Disney's Davy Crockett made a cameo in the twenty-third episode of the fifth season of the ABC drama Once Upon a Time. He is seen inhabiting the Land of Untold Stories, a realm inhabited by characters from fiction and folklore who wish to escape their fates.

As the Davy Crockett serials were created to represent Frontierland on the Disneyland television show, much of the land on opening day drew inspiration from the series, which had ended up becoming a smash hit during construction. While this mega-theme has long-since faded due to the faded popularity of the serials, allusions and elements taken from the series is common to Frontierlands as found throughout the Disney Parks.

Notably, Davy Crockett's coonskin cap is a staple piece of merchandise and a recurring motif in Frontierland, and his theme-song The Ballad of Davy Crockett is a very frequently played song. The attraction The Country Bear Jamboree even has the titular singing bears singing the song. The character Mike Fink from the Davy Crockett series also lends his name to the now closed attraction Mike Fink Keel Boats with tributes still being found in the parks.

Davy Crockett's Explorer Canoes, an attraction currently at Disneyland (California) and previously at other Disney parks. As previously stated, a variety of Davy Crockett themed attractions and features used to be found in the park such as Davy Crockett Arcade and the Davy Crockett Frontier Museum. Crockett himself would appear at the parks, portrayed by cast-members for meeting with guests. A figure of Crocket appeared in the Fort Wilderness of Tom Sawyer Island until it was removed for a Pirates of the Caribbean themed refurbishment.

In Disneyland, the,"Crockett & Russel Hat Co." is a location which serves as an extension of the Silver Spur Supplies shop. This was made in 2004 as a tribute to Crockett's actor Fess Parker being memorialized as a Disney legend. The windows for this shop even mention Fess Parker by name as being the in-lore proprietor of the Coonskin Cap Supply Co..

Crockett is mentioned on the Mark Twain Riverboat's narration where he and George Russel are inferred to be visiting Mike Fink in his cabin on Tom Sawyer Island.

The Davy Crockett's Explorer Canoes used to be featured in Walt Disney World but permanently closed in the year 1994 as part of Michael Eisner's cost-cutting campaign.

In the Magic Kingdom restaurant Pecos Bill Tall Tale Inn, Davy Crockett is among the American folk-tale characters referenced in the layout of the restaurant. The story and theming of this restaurant being that it is owned by the folk-character Pecos Bill and littered with memorabilia from fellow legendary figures who he had acquainted himself with. Crockett's satchel and coonskin hat can be seen hanging on a wall beside a plaque with Davy's name. In addition to this, blueprints for Crockett's first rifle are framed on the wall.

Davy Crockett's clothing can also be found worked into the rooftop of the Frontier Trading Post, being hung up from a clothes-line above the building. His coonskin cap is also hidden in Gaston's Tavern in Fantasyland, hanging from a chandelier of antlers hunted by Gaston. 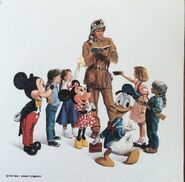 Davy as he once appeared on Tom Sawyer Island
Community content is available under CC-BY-SA unless otherwise noted.
Advertisement