“Scariness is the true measure of a monster. If you're not scary, what kind of a monster are you?”
―Dean Hardscrabble expresses her expectations of what a monster is.[src]

Abigail Hardscrabble is a major character of Disney/Pixar's 2013 animated film, Monsters University, prequel to the 2001 film.[1] She is a dark red dragon-like monster with millipede-like legs and red bat wings, who serves as the dean of the School of Scaring at Monsters University.

To Dean Hardscrabble, there are scary monsters and there are all other monsters. It is no surprise she feels this way—she is, after all, a legendary Scarer and Dean of the School of Scaring at Monsters University. Aspiring Scare students must be up for the challenge to impress her, though she is convinced that her assessment of who is truly scary and who is not is never wrong.[2]

Hardscrabble, back then known only as the Dean, was conceived as a male character and was based on an alligator. However, late in the production, a few weeks before starting the animation, Dan Scanlon decided the character had to be a female. Character Art Director Jason Deamer says Scanlon likes "to play things again type" and believes that was the trigger of the change, as "a male antagonist Dean is an accepted thing in the college movie genre, so the idea was that it would be more interesting to make her a female; it’s something new".[3] Story Supervisor Kelsey Mann says about the original iteration did not work because "he just came in and did a lot of yelling and screaming and it didn’t really intimidate you. [With Hardscrabble's final version] It’s a kind of quiet reserved judgment that really sends the chills up your spine".[4]

As a result of the change, the Dean's design had to be remade. A team of character designers, comprising artists that worked on the original Monsters, Inc., was gathered[3] as they went through many designs. Their designs had her based on a number of intimidating animals, such as a crab, scorpion, snake, moth, bat, and owl.[3][5] The biggest problem and intent came from the need that her appearance had to reflect she is both the dean of the school and a legendary Scarer, two ideas that they found were not necessarily compatible.[5] the team finally settled on using a type of centipede called Scolopendra Gigantea, also known as the Amazonian giant centipede, that combined the creepiness, authority, and elegance they wanted Hardscrabble to have.[3] One was brought to Pixar for reference and was called Kendra the Scolopendra by the MU crew.[6] Hardscrabble's head takes from the crowns of horned lizards, and her wings are based on those of bats and designed to blend into her jacket when folded.[5]

Hardscrabble is the archetype of a strict and no-nonsense school headteacher, and not so easily pleased. She is not afraid to point out somebody's shortcomings and even lightly taunts students who do not impress her. She even proved to have a petty streak in personally testing Mike and Sulley on the spot and dismissing them from the program after they had accidentally broken her scream canister which contained the scream she got that broke the Scare Record. She failed Sulley for his disregard of the importance of the studies while she failed Mike because in her professional opinion he was simply not scary despite his academic performances. At the same time, however, she firmly believes in fairness, as she was understandably angered when one of the teams in the Scare Games cheated and when Sulley admitted that he rigged the machinery on the last event to help Mike win. But despite her harsh exterior, the climax of the film depicts Hardscrabble as capable of a certain degree of sympathy. She also has very keen observation, as she knew Mike only joined Oozma Kappa to get back into the program, which is why she changed the bet into letting the whole team into the program, as opposed to just Mike. After Mike bravely made the bet with her and indeed surprised her at the end of the Scare Games, Hardscrabble warms up to both him and Sulley, and is visibly upset at the idea of expelling them from the university, and does her best to encourage them and wish them the best of luck in the future.

While Hardscrabble is far from evil or malicious, her appearance and mannerisms mark her as antagonistic, given that she is Mike and Sulley's primary opponent in the film, in a similar vein to Anton Ego.

Dean Hardscrabble is first seen flying into Professor Knight's classroom, causing all of the lights in the room to go out with a single flap of her wings. Hardscrabble then told all of Prof. Knight's students (including Mike Wazowski and James P. Sullivan) that they all had to complete a final exam so that they could enter the Scaring Program or else they will be kicked out of the school. Unfortunately, Mike, despite wanting to be a scarer very badly, is unable to scare anyone. And Sulley, despite already being scary, never studied or completed his homework. Because of this, Hardscrabble saw Mike and Sulley get into a big roar-off, ending with both monsters accidentally breaking the dean's prized scream canister. Despite appearing to take the loss of her prized possession well, Hardscrabble retaliated by testing Mike and then Sulley on the spot, finding fault in both (Mike, because in her professional opinion he wasn't scary, and Sulley because of his disregard of the importance of the study and how his method to scare the hypothetical child didn't work) before dismissing them from her program.

However, Mike and Sulley found out that the only way to get back into the School of Scaring is to compete in the Scare Games with a fraternity of rejected monsters called Oozma Kappa. And as a result, Mike made a deal with the dean that if they and OK won the Games, he and Sulley would be readmitted to the program. But if they lost, they will be expelled from Monsters University. During the Scare Games, Dean Hardscrabble secretly watched Mike and Sulley competing from afar, aware that they would both fail. When Sulley confronts her the day before the final event, she asks him if he thinks Mike is scary, which leaves him speechless because honestly, he doesn't. But after OK won the Games when they beat Roar Omega Roar in the final round with the scare simulators, Sulley told Hardscrabble that he cheated by setting Mike's simulator level to easy just to make OK win since to him it is a no-win situation for them otherwise due to Mike's inability to scare. The dean ordered him to leave the campus tomorrow, calling him a disgrace to the university and his family's name when all of a sudden, she was alerted that Mike had secretly snuck into the door lab, prompting Sulley to go there to save his friend. Hardscrabble then shut down the door in question until the CDA arrived and getting things under control, but Mike and Sulley managed to escape back by scaring a handful of rangers. Hardscrabble watches in horror as the tanks begin to fill up rapidly and drastically, being forced to hide behind one of them as the door is about to explode. The explosion further terrified her. As she emerged from the remains of the explosion, she asks Sulley, in horror, about how he and Mike managed to break out. Mike replies they have no idea.

Hardscrabble then has both Mike and Sulley expelled from Monsters University permanently, but was reluctant to let them go because their actions, while considered as a major offense to MU, ended up surprising her. As Mike and Sulley left, Hardscrabble caught them at the exit and encouraged them to "keep surprising people", wishing them luck in the process.

Her words eventually come true as Sulley and Mike manage to create a new means of creating energy through a laugh, which is much more powerful than a scream. Due to this disruptive change in the industry, it is highly possible that she has to redesign the school curriculum to educate and train future Jokesters.

Mike and Hardscrabble make a wager

"Sullivan! Don't go in there!"

"Until the authority arrives, this door stays off."

Another concept of the first design 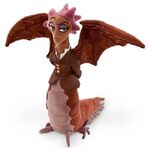