2 (with Entwisle)
1 (with Patrick)
Dean Carroll Jones was an American actor and singer, who participated in numerous live-action Disney films between 1965 and 1977.

As Ensign O'Toole was the lead-in show on NBC to Walt Disney's The Wonderful World of Color, Disney ordered a print of Jones' latest film Under the Yum Yum Tree to study. They signed him on for a string of Disney films in the 1960s and 1970s, beginning with That Darn Cat! (Hayley Mills' last film with Disney). His performance was so well-received that they used him for future movies including The Ugly Dachshund, Blackbeard's Ghost, and Snowball Express. He and Suzanne Pleshette were frequently paired in Disney's gimmick comedies.

Jones' signature Disney role would be as race car driver Jim Douglas in the highly successful The Love Bug series. He appeared in two feature films (The Love Bug and Herbie Goes to Monte Carlo), as well as a short-lived Herbie television series produced in 1982, and the made-for-TV movie The Love Bug in 1997.

Jones' Other film credits include Jailhouse Rock, Never So Few, Under the Yum Yum Tree, Born Again, Beethoven and Batman & Mr. Freeze: SubZero. He also appeared in stage productions like There Was a Little Girl, Into the Light and most notably Company.

Jones died on September 1, 2015, at the age of 84 after suffering from Parkinson's disease. 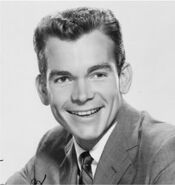 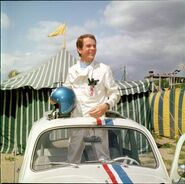