Disney Wiki
Register
Don't have an account?
Sign In
Advertisement
in: Article of the week, Locations, Star Wars locations,
and 8 more
English

“Don't be too proud of this technological terror you've constructed. The ability to destroy a planet is insignificant next to the power of the Force.”
―Darth Vader

The DS-1 Death Star Mobile Battle Station (more commonly known as the Death Star) is a fictional moon-sized space station and superweapon that appears in the Star Wars universe.

Used by the Galactic Empire, this battle station is capable of destroying an entire planet with a single destructive energy beam from its superlaser, bringing great fear to those who would dare oppose the Emperor.

The Death Star was commanded by Grand Moff Tarkin, but Sith Lord Darth Vader served as the Emperor's emissary and wielded the widest possible authority to enforce the Emperor's will. The Death Star's centerpiece was an awesome, planet destroying superlaser. At 160 kilometers in diameter, it was the size of a Class IV moon and was one of the largest starships ever built. Fully half of the battle station's interior was filled by the reactor core, that sublight and hyperdrive systems, and the superlaser housing.

The station had capacity for a crew of over 265,000 soldiers. Gunners, ground troops, starship support crew and pilots brought the total on board personal to nearly one million beings. Even more amazingly is that these figures indicated minimum crew standards. For weaponry, in addition to the superlaser, the Death Star had 15,000 capital ship turbolasers and over 700 tractor beam projectors. These projectors could capture virtually any ship and when working in conjunction with one another, could reel in even an Imperial Star Destroyer. The Death Star also maintained an awesome array of support ships and vehicles, with 7,000 TIE Fighters, four strike cruisers, over 20,000 military and transport vessels and over 11,000 combat vehicles.

The Death Star's origins date back to the era leading up to the Clone Wars. The Geonosian architects and engineers command by Poggle the Lesser began its creation for Darth Sidious and Count Dooku, and had funding for the initial project thanks to the Trade Federation, Techno Union, Commerce Guilds, Muunilist Banking Clan and, covertly, even the Republic itself. According to Poggle the Lesser, who explained under interrogation during his capture during the Clone Wars, the Death Star (unnamed at this point), remained unfinished by the time of the Battle of Geonosis. In Attack of the Clones, Poggle entrusts the schematics for the Death Star to Count Dooku for safe keeping, warning him that if the Republic found out, it could spell the end for the Confederacy. Dooku is able to escape Geonosis with the schematics and deliver them to Sidious on Coruscant. Its power source for the main superlaser weapon (as-yet also unfinished) were Kyber crystals, based on Sith technology. During a mission to Mygeeto, members of the 501st Legion were assigned to retrieve the crystals from a Separatist power core under orders from Palpatine. Eventually after the Great Jedi Purge and the Republics's transformation into the Galactic Empire, the Geonosians who served as the builders of the station were eradicated in a near-successful genocide. The Death Star's construction would later be completed by the Empire.

By 0 BBY, the battle station was complete. Well aware of the station, a Rebel group, codenamed "Rogue One" commenced an unauthorized operation to steal the plans for the station, which were stored in Imperial high-security data bank on the planet Scarif. The plans were known to contain the whereabouts of a fatal weakness at the center of the space station in the form of a reactor module, sabotaged by Jyn Erso's father, Galen Erso. Any pressurized explosion to the component would set off a chain reaction that would destroy the entire station. Rogue One succeeded in stealing the plans, but at the cost of their lives. The plans were handed over to Princess Leia, and when her ship fell under attack over Tatooine, she stored them within R2-D2. With help from Luke Skywalker and the latter's new friends, finally delivered the plans safely to the hidden Rebel base on Yavin 4.

While attempting to get the location of the Rebel base out of Princess Leia, Wilhuff Tarkin threatened her homeworld of Alderaan with destruction to demonstrate the station's power. Despite giving the base's location as Dantooine (which later turned out to be an abandoned base), Tarkin dismissed Dantooine as being too remote for an effective demonstration, and had the superlaser fired upon Alderaan. Despite meeting the planetary shield, the planet was obliterated with one blast. This event later turned out to be a PR disaster for the Empire, suffering much backlash and (combined with the dissolution of the Imperial Senate) only bolstering Rebel sentiment.

The station was then taken to the Yavin system, only to be met by a force of thirty Rebel fighters (twenty-two X-wings and eight Y-wings). Though most of the fighters were shot down by Darth Vader, Luke Skywalker managed to shoot proton torpedoes into an unshielded exhaust port leading directly to the main reactor. Seconds after entering the port, the station exploded, killing everyone onboard including Grand Moff Tarkin. The destruction of the Death Star was a blow the Empire would spend three years recovering from.

In Return of the Jedi, a new version of the Death Star was constructed and protected by an invisible shield from a generator on the nearby moon of Endor. The Rebel Alliance's mission was to destroy the generator and thus disable the shield, allowing the Millennium Falcon and the Rebel fleet to destroy it for good.

Death Star under construction in 19 BBY

The superlaser preparing to fire

Pulling the Millennium Falcon in its docking bay

The Death Star over Jedha

The Death Star in Rogue One

Death Star carving in the sand 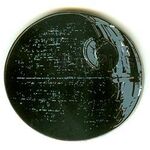 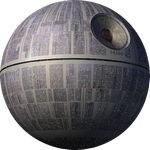 The Death Star in a poster for Rogue One

Spaceship Earth as the Death Star 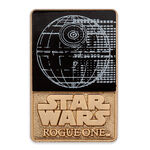 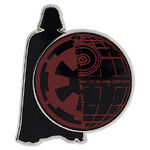 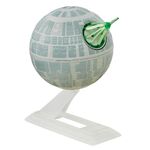 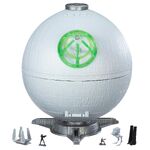 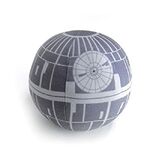 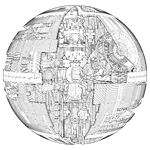