Disney Wiki
Register
Don't have an account?
Sign In
Advertisement
in: Characters, Agents of S.H.I.E.L.D. characters, Villains,
and 12 more

The original character from Marvel Comics

HYDRA agent within SHIELD, Ward's S.O. and founder of Centipede.

In 1990, Garrett became the first man to be part of Project Deathlok by Cybertek. His robotic implants helped him survive. In 1999, Garrett moved to Plymouth and met Grant Ward. He later recruited Ward into HYDRA as his S.O. After Coulson got revived, Garrett founded a branch of HYDRA called Centipede Group. He wanted to know how Coulson got revived because Garrett's implants are failing and that Garrett is dying. His ally, Raina made the Centipede Serum and put it inside Garrett's implants. Garrett hacked into S.H.I.E.L.D. and used psyche-evaluations. His amount of knowledge made him known as "The Clairvoyant". Garrett is responsible for making people including Michael Peterson, Akela Amador and Chan Ho Yin use devices to make them part Deathlok. Garrett later ordered Ian Quinn to shoot Skye in the stomach. Garrett came to the Guest House with Coulson to grab the GH-325, but he was too late. Garrett later helped Coulson find Garrett's decoy, Thomas Nash. Garrett forced Coulson to kill Victoria Hand and lied that she is the Clairvoyant. Coulson realized that Garrett's cover is blown since he said too much info. Garrett was later arrested by Victoria Hand. Hand was later killed by HYDRA infiltrator Grant Ward. Both Garrett and Ward moved to the Fridge and stole various artifacts and freed tons of prisoners. Garrett came to the Bus and was dying. Raina helped synthesize a copy of the GH-325 from Skye's hard drive. Garrett later got injected with the drug and claimed that he feels "the universe". The drug made Garrett more delusional and it made him write alien markings which are blueprints. Garrett was later defeated by former ally, Michael Peterson. Garrett got synthesized into a cyborg just before Coulson vaporized him with the 0-8-4 from Peru.

Coulson's and his team, travel back in time, and create a branched timeline. In this new timeline, Nathaniel Malick recruits Garrett to join his cause, based on his knowledge of future events, in the prime timeline. Garrett accepts his offer, and gains the powers of teleportation from Gordon, via a device that replicates Inhuman powers, in those without the Inhuman gene. He works alongside Malick, Kora and the Chronicoms, to bring the S.H.I.E.L.D. agents down, but is betrayed by Nathaniel. When he agrees to help Coulson and May, he teleports them to a S.H.I.E.L.D. safehouse, where he is accidentally shot, by Victoria Hand. 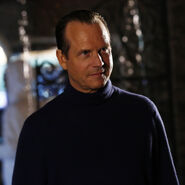