Phil of the Future

To control the world (foiled)

Gets melted to death into a black goo
Deborah Hortence "Debbie" Berwick is a character in Phil of the Future. She was written out of the show before the first season ended.

Debbie is portrayed by Kay Panabaker.

She is the complete opposite of Pim and has a very happy attitude towards life. She hardly ever gets mad and is very nice.

Debbie considers Pim to be her best friend. Because of this Pim, likes to take advantage of Debbie's good-natured personality.

She doesn't like raisins, chihuahuas or naughty nibblers. She lives with her grandma and her curfew is 6:00 pm.

Debbie also teaches a yoga class. Her other friends are Neckbrace Lana and Silent Judy. Debbie used to date Bradley until Pim broke them up by changing Debbie's personality but Debbie went back to normal. Debbie enjoys singing and is in the school band. It was revealed that she can hold a note for a very long time.

In the episode Halloween, it was revealed that she is one of the Sugar and Spice 800 cyborgs from the future. They were supposed to be "super sweet and giving and make the world a better place," but something had malfunctioned. Over time, they would become crazier and crazier, until their sweetness turned into evil. Apparently, the cyborgs had a problem of overheating, due to their evilness. They were all then sent to the 21st century.

At the episode's conclusion, Phil melted her into black goo.

It was also revealed that the two things that got her mad were "naughty nibblers" and chihuahuas. 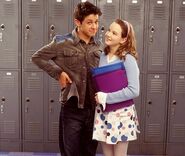 Retrieved from "https://disney.fandom.com/wiki/Debbie_Berwick?oldid=3979714"
Community content is available under CC-BY-SA unless otherwise noted.