Josie and Cora
Dee Bradley Baker (born August 31, 1962) is an American voice actor who has provided many voice roles in various animated television shows, films, and video games. He is best known for providing animal and creature sounds as well as human voices. 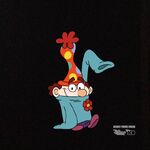 Cheese
Secret of the Wings

Fiona
Secret of the Wings

Mooch
G-Force
Add a photo to this gallery

Retrieved from "https://disney.fandom.com/wiki/Dee_Bradley_Baker?oldid=2622821"
Community content is available under CC-BY-SA unless otherwise noted.