To help John save Barsoon then to marry John

Is united with her husband John when he returns to Barsoon

"If you had the means to save others, would you not take any action possible to make it so?"
"Fate has brought you here John Carter."
Princess Dejah Thoris is the deuteragonist of the 2012 Disney film John Carter.

Both beautiful and wise, Dejah Thoris is the princess of Helium. Deja is a passionate advocate for the Heliumites and their way of life. Dejah is also Regent of the Royal Academy of Science, and was trained to rule and fight.

One day Deja was on the verge of a discovery that could permanently shift the balance of power between her nation Helium and their enemy Zodanga, called the Ninth Ray. But her research was sabotaged by an alien, called a Thern. The Thern's knew of Deja's work, and that it could bring peace and prosperity back to Mars. At the same time the Thern's conspired with the prince of Zodanga, Sab Than to assassinate Deja during a fake wedding and conquer Helium.

However, Dejah escaped Helium, Sab and the Thern's. It was then that she met John Carter. A human from the planet Earth. Deja managed to convince John Carter to the fight to save Helium. 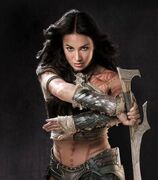 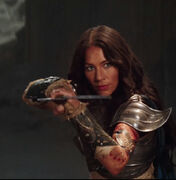 Retrieved from "https://disney.fandom.com/wiki/Dejah_Thoris?oldid=4025627"
Community content is available under CC-BY-SA unless otherwise noted.