The park, being with Chance

Chance in trouble, not being with Chance, danger, Bando's affections towards her

Active
Delilah is the deuteragonist of Homeward Bound II: Lost in San Francisco. She is a stray Kuvasz, a member of Riley's gang, and Chance's love interest.

Details about her early life are unknown, aside from being born a stray. However, it is known that she eventually joined up with Riley and his gang of stray dogs. She apparently has a rivalry with Ashcan and Pete, two vicious junkyard dogs, given her comments to them.

She meets Chance (who turned tail and fled earlier, due to mistaking Riley's gang as reinforcements for Ashcan and Pete by Sassy) when she tried to bring him back to Shadow and Sassy. While chasing him, she hinted that she seemed attracted to him, by first commenting "Cute Butt". After tackling Chance in an alley, Delilah explains why she was chasing him. The two dogs later spark a romance together, though Riley soon finds out, much to his displeasure. Delilah refuses to listen to Riley when he tells her that she shouldn't be with Chance because he is a housepet. She also refuses to listen to Shadow when he tells her how Chance behaves at home. However, due to Chance's unruly antics, he is soon captured by Jack and Ralph, two dogcatchers who drive a blood-red van. She also ends up having her paw run over by the Blood Red Van, ultimately inspiring Bando to attack the drivers due to viewing that as a personal affront to him, although the injury was comparably minor. Although Delilah and Riley's gang save Chance from the blood-red van and its drivers, she is forced to turn down Chance on account of what Riley and Shadow had said. This hurt Chance as he storms off. Shadow tries to stop him from leaving, but he angrily told him off and berates him, Delilah, Sassy and everyone else for what they done and caused before he continued on his way. That made Delilah feel terrible for what she said to him as she and everyone else helplessly watch him depart and vanish.

She eventually decides to quit Riley's gang (which Riley presumably allowed her to do) and travels over to the Seavers' house, using her smell and her heart to find Chance. When she reached the house and found him at last, She apologizes to Chance for what she did and said, and confessed her love for him and how much she missed him. Chance is overjoyed to see Delilah again, and the two dogs greet each other affectionately. Jamie then befriends Delilah and asks his mother and father if she can stay, seeing why Chance was so sad in the first place, as do Hope and Peter. Their parents ultimately agree, and she is adopted as a member of the Seaver family, much to Chance's delight. 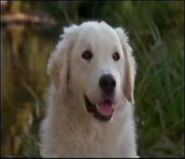 Chance and Delilah watching the pond