Dylan (son)
Dolly (stepdaughter)
Dalmatian Puppies (children, adopted children and stepchildren)
Delilah is a character from 101 Dalmatian Street. She is a British Dalmatian who is the great-great-granddaughter of Pongo and Perdita. She is married to an American Dalmatian called Doug. The two also have a large litter of puppies from previous marriages and adoptions which, when combined together, make a total of 99.

In some early concepts, Delilah was planned to have an appearance almost identical to Perdita. Whether or not she was planned to be Perdita before being altered is not known at this time. The concept art also shows that she would have worn a fob watch on her collar, rather than the tag she has in the show.

Delilah is a regular in the show. While she works as a nursing dog at a London hospital, her eldest pups, stepdaughter Dolly and son Dylan, watch over their miscellaneous younger siblings. She appears to be the more level-headed one out of her and Doug, knowing how to easily handle having such a large litter of pups, likely due to coming from Pongo and Perdita's side of the family. When she sees a swarm of pups coming her way, she knows how to dodge the wave so she does not get completely trampled.

In the episode "Dog's Best Friend", she is first seen having just woken up and wishes luck to Dolly and Dylan with their housework before heading to work herself.

In "Boom Night", she helps fit earmuffs onto the other pups during the titular event to protect her children from the disruptive sounds before she and Doug head to their respective jobs. Delilah informs Dolly that it is the busiest night of the year for her and Doug, and she will leave the safety of her children in her eldest's paws.

In "Girls' Day Out", we learn Delilah is allergic to orchids, which causes her to get into an argument with Dolly. To help the two make up with one another, Doug has the two spend time at the animal spa together.

Delilah is shown at work in "The Dog House", which shows that she is the heart of Doctor Dave's medical team, joking that he would probably lose his medical license without her. When she overhears Hugo, Clarissa's human, call Pest Control on 101 Dalmatian Street, her reaction accidentally leads to Doctor Dave to falling on a syringe filled with sedatives, which knocks him out. Knowing they need a human to pass the Pest Control's inspection, Delilah commandeers a motorized wheelchair to take Doctor Dave back to the house, escorted by P. C. Pearl, and tries to wake Doctor Dave up. When she is able to get Doctor Dave to the house, the Dalmatians are able to wake him up, with him realizing just how big Delilah's family is. Pest Control arrives, and Doctor Dave is willing to cover for the Dalmatians, which Delilah says earns him a hug, leading to a puppy pile.

In "London, We Have a Problem", Delilah returns home from work with her husband, only to smell a scent that worries her. She finds and sniffs Hunter's remote and urges Doug to go upstairs into the attic of the house with her to check on something. She brings Dolly and Dylan with her and both she and Doug get a vial that contains a hair and open it. Both of them smell it and confirm it is the human scent of a De Vil, with both now worried that Cruella De Vil might be after their children.

In "Fetch", Delilah & Doug are celebrating their anniversary. According to Doug, the two had their first drink together by the pond in the park. 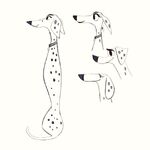 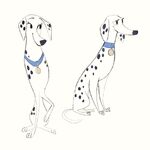 Delilah As She Appears In The Pilot Animation Reel.

Delilah and her husband Doug at the Dalmatian dinner table

Delilah and Doug confirm their worst fears...the scent is from a De Vil! 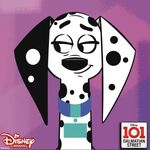