Disney, Willa, technology, being a DHI

Elvis the cat
Dell Philby is a 15-year-old from Orlando. He is a main character of the Kingdom Keepers book series by Ridley Pearson. He is one of the five kids that modeled as DHIs (Disney Host Interactive or Daylight Hologram Imaging) to become holographic guides to the Disney Park. He is the brain of the Keepers. Their goal is to stop the Overtakers from controlling the parks.

Philby is a bit of a genius. He is an excellent researcher, a walking encyclopedia, a computer wiz and an electronics mastermind. His thrill-seeking tendencies play against his inner techno geek. The girls at school adore him, but he wants nothing to do with them. He is focused. His weekends are about rock climbing and, of course, his laptop. This is the kind of guy you want on your team.

Philby on Disney After Dark 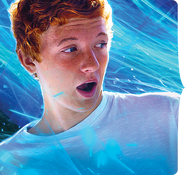