Alex Pearson (Hutch Dano) is an avid Lemon Oaks High School hockey player who is seeking the attention of Matisse Burrows (Kelsey Chow), the most attractive girl in school. All he wants is a car, but his father refuses to buy him one until his 'attitude' improves. After showing off at one of his games and getting suspended from the team, Alex's chances of getting a car majorly decreases. In order to get the car, he has to do chores and babysit his much younger sister Emily (Genevieve Hannielius). Emily runs into problems with her Bumble Bee troop. Their leader promptly resigns to move to Chicago as her husband just got a job there, and she has failed to find a successor, leaving the girls on their own. Alex takes over as leader, but does not have the authority. To keep up the appearance of legitimacy, the girls disguise him as an elderly Den Mother, where he takes up the alias "Mrs. Zamboni".

The Bumble Bee troop has to work to be able to attend the Camporee, the most important Bumble Bee event of the year, by selling cookies and completing various badges. Originally the badges are made up by Alex for doing his chores, but after those are deemed unacceptable, he works to get the girl badges which have been approved by the council. At the same time, he also stands up for the other Den Mothers to Dina (Vicki Lewis), a very controlling Den Mother. The Bumble Bees and Alex finally earn enough to attend the event. However, the girls have exhausted their supply of cookies and still have insufficient funds to pay for the Camporee. Emily suggests going to the hockey game and selling muffins to make up for the difference. Meanwhile, Alex makes inroads with Matisse, who has much in common with Emily, as Matisse is a Bumble Bee who earned the top rank.

However, during the game, Alex's team is down, and the coach is wondering where Alex is now that his suspension is over. Alex puts himself in, but fails to realize he forgot to take off his "Mrs. Zamboni" disguise, and it is revealed that Emily's troop is not under command. Doing so renders Emily's troop unfit to participate in the camporee, alienates his best friend and teammate "Goose", and disappoints his sister and father. Afterwards, Emily refuses to talk to him and his father refuses to punish him, knowing that Alex will punish himself. While going for a walk to clear his mind, he sees a runaway dog, whom he returns to an elderly neighbor of his named Mrs. Jacklitts. Inside her house he sees old Bumble Bee certificates and a picture of his mother (who died two years prior) as a little girl with Mrs. Jacklitts, who was her leader.

Upon learning this, Alex makes a deal with her, where he will do chores for her singlehandedly. In exchange, Mrs, Jacklitts will take command of Emily's troop, being an authorized leader. After introducing herself to the troop, she says that while Alex's actions were indeed wrongheaded, there have been times the girls have misbehaved, and convinces them to forgive Alex. Alex, giving a pep talk before the final game of the season, apologizes to his team and offers the captaincy to Goose (David Lambert), who refuses, saying he wants Alex to be the real captain. During the game, Alex acts as a distraction instead of hogging the puck to himself, allowing his team to win. He sacrifices the winning shot to Goose, causing Goose to get the All-Star spot Alex wanted. The Bumble Bees show up with Alex's father; Matisse forgives Alex and reveals that they want Alex to be their Den Mother, to which Alex accepts.

At the Camporee, Alex is forced to put on the Bumble Bee uniform in order to be the Den Mother. Dina wants a stop to all this, but her husband, who was the referee who suspended Alex, is happy to see his change of attitude. He says there is one opening remaining on the All-Star team and offers it to Alex. Alex, thinking about Emily, is hesitant to consider but accepts under the condition he will continue to commit to the troop. The girls cheer Alex for being their "Den Brother".

The film was shot in early 2010 on location in Salt Lake City, Utah. 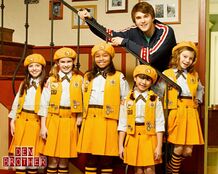 The cast of Den Brother.