The Griffs' home, specifically in a fish bowl, in or out of the house.

Stanley, helping him out

"The Great Big Book of Everything" song

He is an orange goldfish with a British accent and one of Stanley's three pets, the other two being Harry and Elsie. In fact, he is Stanley's best friend who gives him learning about animals to help him with his everyday problems, which interest him. He also has to point out the flaws in Stanley's ridiculous solutions. He has musical talent. Occasionally, he is shown to be playing the music for songs featured within the episodes of Stanley. He even breaks the fourth wall in almost every episode by either encouraging the viewers to do something fun or by asking them questions corresponding to the given topic. 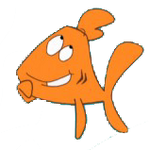