Marin, Ruthanna, Henry, and Galen
Dennis Lee Hopper was an American actor, director, writer, film editor, photographer, and artist. He was well-known for starring in several films, such as Easy Rider (which he also directed), Apocalypse Now, and Blue Velvet. He also portrayed Howard Payne in the 1994 thriller film, Speed, and voiced Tony in the 2010 Lionsgate animated film, Alpha and Omega (his final project which was dedicated to him).

For Disney, he played King Koopa in the 1993 Hollywood Pictures film, Super Mario Bros., Dr. Roberts in My Science Project, and Frank Slater in Meet the Deedles.

He died 12 days after his 74th birthday. 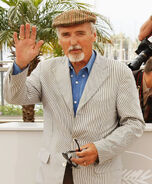 Dennis Hopper attending 61st International Cannes Film Festival in May 2008.
Add a photo to this gallery
Retrieved from "https://disney.fandom.com/wiki/Dennis_Hopper?oldid=4253252"
Community content is available under CC-BY-SA unless otherwise noted.