Sar Labooda † (sister)
Depa Billaba is a Jedi Master, part of the Jedi High Council and the mentor of Kanan Jarrus from the Star Wars universe.

Depa is known for being thoughtful, an excellent problem solver, soft-spoken, enlightened, and spiritual. She was also shown to be protective of her comrades, like Mace Windu. However, during the first few months of the Clone Wars, Depa gradually degenerated into madness on a mission and fell into a coma.

As a Jedi, Depa is highly intelligent and wise, and willing to sacrifice herself for the sake of others. She also believed that the Jedi Order made a crucial error in taking military titles, thinking that it was not a matter of leadership but of role and rank.

Depa developed a close relationship with her apprentice, Caleb Dume, being more strict as a teacher than he later was. However, she is not overly serious, as she sometimes gently teased him about his habit of asking many questions.

Depa is a short, lithe, young and attractive humanoid woman with two chalactan marks adorning the bridge of her nose and forehead as symbols of her illumination and spiritual awareness. She has brown eyes, caramel skin, simple makeup, red (often plum) lips, and a brown hair tied in a chalactan-inspired bun with two platted tails looped twice down toward her shoulders. She is often wearing simple brown robes with a long frontal piece connecting to the hood, a long, cream colored dress (The Phantom Menace), and sometimes a shorter, greeny-blue colored battle tunic, pants, and boots.

Depa is a young member of the Jedi High Council when Qui-Gon Jinn reports that he faces a Sith on Tatooine. He also claims he found the Chosen One, who is a boy named Anakin Skywalker. The council refuses to train him, as Yoda says there is too much fear in him. She later attends Qui-Gon's funeral, which Qui-Gon was killed by the Sith Lord, Darth Maul, on Naboo.

Depa is still a part of the Jedi High Council when they assign Obi-Wan Kenobi, and his apprentice, Anakin Skywalker, to protect Padmé Amidala, who had been targeted in a complex assassination plot. She later safeguards the Jedi Temple on Coruscant with fellow Jedi Master Oppo Rancisis, while her old master Mace Windu takes a 250-strong Jedi strikeforce to rescue Obi-Wan, Anakin, and Padmé on Geonosis.

Depa makes a cameo appearance in the episode "Old Friends Not Forgotten". She appears in a hologram with her apprentice, Caleb Dume during a flashback scene where they discuss with the other Jedi generals about the overwhelming attack by the Separatist.

At the time before Star Wars Rebels, six months into the Clone Wars, Depa participated in the war with her Padawan, Caleb Dume. They fight side by side during the Clone Wars until the Execution of Order 66, when clones they fight alongside with turn against them. The two fight in defense, but Depa soon realizes that they are vastly outnumbered by the Clone Troopers of their unit. She orders her apprentice to run while she holds them off, but is quickly gunned down by Commander Grey and the rest of the men who once served under her command. Her death would leave her apprentice, now known as Kanan Jarrus, scarred with grief and guilt because he escaped and she did not. Years later, Kanan would be able to take on an apprentice of his own, Ezra Bridger and move on from his master's death.

Depa appears in the first episode "Aftermath". Darth Sidious executed Order 66, a command to all clone troopers to kill the Jedi as traitors, this included her entire clone squadron shooting at her. She is killed by her clone troopers after being overwhelmed by them after telling Caleb Dume to run, leading her apprenctice to escape. 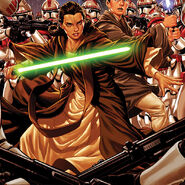