"Derezzed" is a song written by Daft Punk for the soundtrack of the motion picture Tron: Legacy, available on the album of the same name. As a pre-order bonus for the album on the iTunes Store, "Derezzed" was released by Walt Disney Records as a single on December 8, 2010. It was remixed by The Glitch Mob and Avicii for the remix album Tron: Legacy Reconfigured. "Derezzed" was also included on the 4-track vinyl EP titled Translucence, released by Walt Disney Records.

Daft Punk enters Flynn's Arcade and begins playing a game developed by Encom named Derezzed, with Guy-Manuel de Homem-Christo playing as Prog 1 and Thomas Bangalter as Prog 2. Derezzed plays out like a light cycle jousting game in the grid. While an unknown program watches the light cycle joust in the distance, Prog 2 wins the match. In the arcade, de Homem-Christo is disappointed. Back in the grid, Prog 2 is revealed to be Quorra (Olivia Wilde). The video was directed by Warren Fu. 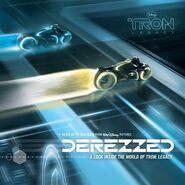 Retrieved from "https://disney.fandom.com/wiki/Derezzed?oldid=3576446"
Community content is available under CC-BY-SA unless otherwise noted.