View source
watch 01:40
Descendants 2 - Trailer
Do you like this video?
Play Sound

The story deepens in the music-driven sequel to the global smash hit Descendants, as the teenage sons and daughters of Disney's most famous villains — Mal, Evie, Carlos, and Jay (also known as Villain Kids, or VKs) — try to find their place in idyllic Auradon. When the pressure to be royally perfect becomes too much for Mal, she returns to her rotten roots on the where her archenemy Uma, the daughter of Ursula, has taken her spot as self-proclaimed queen of the run-down town. Uma, still resentful over not being selected by Ben to go to Auradon Prep with the other Villain Kids, stirs her pirate gang including Captain Hook's son Harry and Gaston's son Gil, to break the barrier between the Isle of the Lost and Auradon, and unleash all the villains imprisoned on the Isle, once and for all.

Six months after the events of Descendants, the Villian Kids or VKs from the Isle of the Lost; Mal, Evie, Jay, and Carlos have found their own happy endings living at their new home Auradon Prep, but Mal longs for the freedom she had on the Isle of the Lost ​​​​​ (Ways to Be Wicked ​​​​​​).

Mal struggles with her newfound popularity as the girlfriend of King Ben, putting a spell on her hair making it blonde, and uncomfortably maintaining a princess-like personality. On top of all this, Mal frequently suffers from sudden surges of power as she tries to suppress who she truly is to be what Aruadon wants her to be.

With the Royal Cotillion Dance only days away, the whole kingdom is buzzing with excitement, while Mal dreads the occasion after finding out that going with Ben is apparently the equivalent of getting engaged.

Mal confides her issues in her friends Evie, Carlos, and Jay, but they are content with their new lives in Auradon and do not wish to return to the Isle of the Lost. Evie has become the most successful designer at Auradon Prep with help from Doug, Jay is a star athlete and Carlos is trying to ask Jane to the upcoming Cotillion dance. Evie scolds Mal for relying on her mother's spellbook to stay on top of her responsibilities.

Jay, now captain of the Sword & Shields team is pressured by his fellow teammate Chad Charming, son of Prince Charming, to exclude Lonnie, daughter of Mulan onto the fencing team despite her skills because of the rules against girls being allowed on the team.

Carlos turns to Mal for help with honesty. Mal gives him a sweet that will make him speak the truth, but his dog, Dude, eats it, magically speaking the blunt truth in English.

Meanwhile, across the sea on the Isle of the Lost, Uma, the daughter of Ursula, has taken her spot as self-proclaimed queen of the Isle with support from her allies, Harry Hook, Son of Captain Hook and Gil, Son of Gaston. Jealous of the life that Mal now has on Auradon, Uma and her gang plot their revenge against Auradon.

While on a date together, Ben eventually discovers Mal's reliance on magic when he finds her spellbook and she comes clean about her insecurities, causing a falling-out between the two of them. Heartbroken, Mal packs up her belongings and heads back to the Isle on an enchanted motorbike gifted to her by Ben, leaving behind his ring.

When Ben finds out from Evie that Mal has left Auradon, he immediately decides he has to go after her and apologize. The rest of the VK's accompany him, knowing that if he does go then he will be in danger due to his position as King and lack of street smarts.

Ben, Evie, Jay, and Carlos sneak onto the Isle to find her, Ben is eager to get moving but stands out too much forcing the rest of the group to give him a lesson on how to behave on the Isle ('Chillin' Like a Villain'), but they are recognized by Gil who runs off to alert Uma.

Ben confronts Mal in the VK's old hideout. She rejects his feelings for both his sake and Auradon's worried that she has too much of the Isle in her to ever truly fit in. Ben leaves dejected, only to be captured by Harry who tells Mal to come alone to Ursula's Fish and Chips and confront Uma if she wants him.

Mal and Uma arm wrestle for Ben and Fairy Godmother's wand, which Uma wins. Uma orders Mal and her friends to retrieve the Fairy Godmother's wand by noon the next day or Ben dies. Jay and Carlos return to Auradon with a plan to create a replica of the wand using Carlos' 3D Printer while Evie and Mal remain on the Isle.

The girls visit Dizzy at the salon where they use chemicals to make smoke bombs. Dizzy insists that they take some of her own designs back with them and Evie leaves feeling guilty that Dizzy doesn't have the opportunity to return with them. On their return to the hideout, Evie tries to convince Mal to come back to Auradon but Mal insists that she will always be the girl from the Isle. The two of them reflect on their friendship together and decide that no matter where they are, the two of them will always be there for one another (Space Between).

Carlos and Jay return to Auradon Prep, where they create the replica only to be caught by Lonnie who overheard everything that has happened from Dude. As they try to get away they are caught by Lonnie, who blackmails them into letting her come back to the Isle with them.

As they wait for the VK's return on Uma's ship, Uma speaks with Ben, bitter that she and the others were not chosen to go to Auradon. Ben takes this into account and invites her to Auradon, explaining that he had intended to bring more of the Villains children across. Uma tells Ben that she will find her own way to make it to Auradon.

The VK's return along with Duke and Lonnie to confront Uma. (It's Goin' Down). Mal hands over the fake wand using Dude to prove its 'legitimacy' in exchange for Ben, but Uma realizes the forgery. A swordfight ensues with the VK's coming out victorious, unaware that Mal has left her spellbook behind.

The group flees back to Auradon, but Mal and Ben's relationship is still rocky. The VK's come to terms with their past, realizing that they cant from it any longer and agree to be honest with themselves and each other. Carlos finally confesses his feelings to Jane and asks her to Cotillion, while Jay appoints Lonnie as the captain of his team in order to comply with the rules of the team.

Later that evening, everyone boards the Cotillion Ship excited for the festivities. Ben arrives late and stuns everyone when he brings out Uma, who he declares as his true love. Uma explains that she got through the barrier just as they were leaving and made her way to Auradon. The two thank Mal for bringing them together and they begin the first dance of the night. Just as the VK's are about to leave, Jane uncovers the stain glass window Ben commissioned to show his affection for Mal who realizes he loved her for who she was all along. In retaliation, Uma asks Ben to reveal his gift for her; the taking down of the barrier around the Isle.

Suspecting Uma has cursed Ben, Mal confesses her love for Ben and kisses him, breaking the spell. Enraged, Uma leaps into the water using Ursula's magic seashell to transform into an octopus. Mal finally unleashes her full power and transforms into a dragon and battle against her. Ben intervenes, quelling the battle, and Uma returns the ring that Ben had originally given her when he had declared her as his true love. She leaves, despite his offer for her to stay in Auradon.

Mal and Ben reunite on board the ship and Mal surrenders her spellbook to the Fairy Godmother. Evie requests that Dizzy and other children on the Isle be allowed to attend Auradon Prep. Mal and Ben begin the first dance of the night and are joined by their friends as they celebrate. (You and Me).

In a mid-credit scene, Uma addresses the audience, promising that the story is not over. 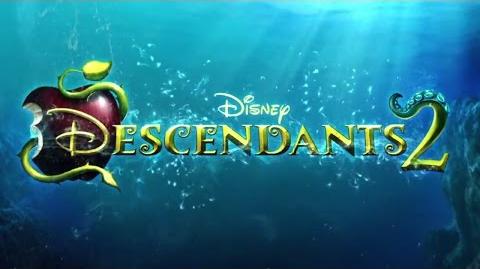 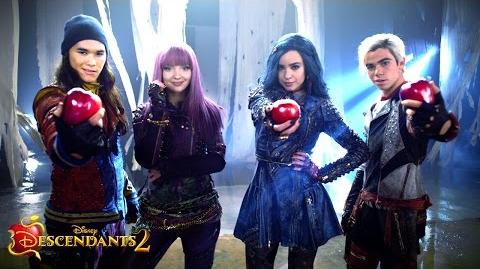 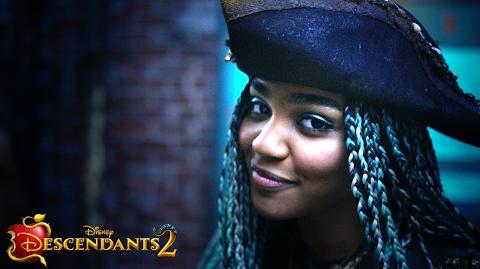 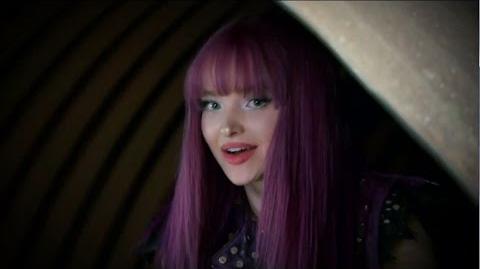 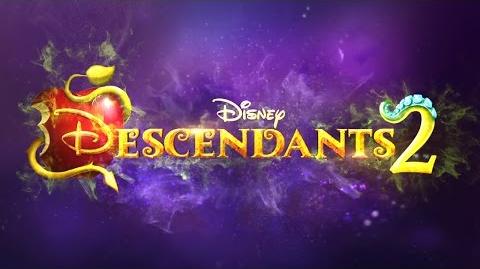 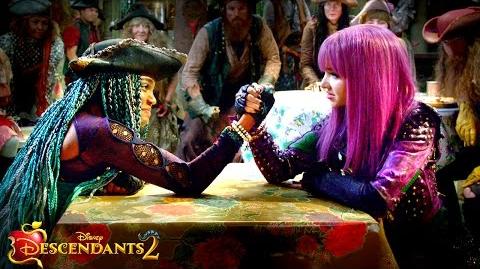 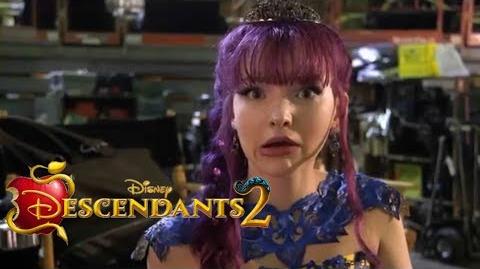 Descendants 2 - Its Going Down - Behind the Scenes Special 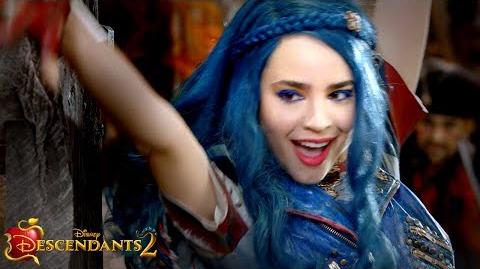 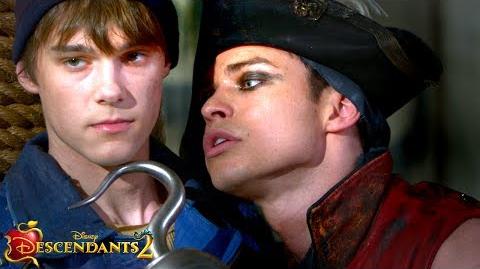 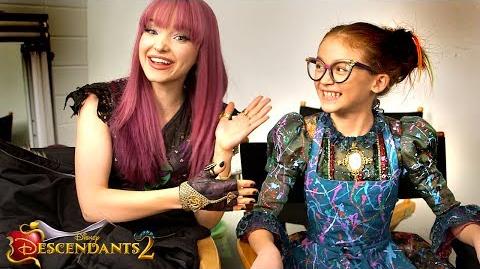 Descendants 2 - It's Going Down! 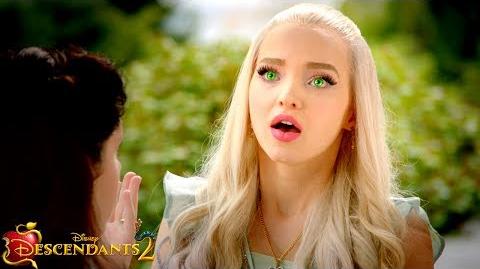 The Disney Wiki has a collection of images and media related to Descendants 2.