The Avengers: Earth's Mightiest Heroes
Ultimate Spider-Man
Avengers Assemble
Guardians of the Galaxy
What If...?

The Marvel Comics magical armor of the same name.

The Destroyer is a Marvel Comics character, who appears in the Marvel Cinematic Universe in the movie Thor. He later was transformed into the Destroyer Armor Prototype Gun, used by Phil Coulson in The Avengers and Agents of S.H.I.E.L.D.. The Destroyer is a Asgardian machine with unstoppable power.

The Destroyer was created by Stan Lee and Jack Kirby.

The Destroyer is an enchanted suit of armor that is lifeless until animated by a living being. It is covered in metal plating with a core in the center of its chest and has sets of spikes on its sides. Its head has a U-shaped plate on top of it and a vent-like visor where it can emit energy from. Two glowing eyes are also present above the visor.

Loki takes control of the Destroyer to finish the depowered Avengers who were facing the Wrecking Crew. 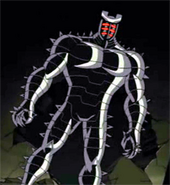 The Destroyer in The Avengers: Earth's Mightiest Heroes