Adam Irigoyen
Martin "Deuce" Martinez[1] is a main character on Shake It Up. He has been described as a con-man, usually seen selling random things, usually from the inside of his jacket. Deuce has connections to everything ("Add It Up"). His father and mother have both been mentioned, but never by name. He has many family members and a handful of his cousins have been seen in episodes. His most prominent family member is Uncle Frank, who owns Crusty's, where Deuce works. He attends John Hughes High School in Chicago, Illinois with his friends; Ty Blue, Rocky Blue, and CeCe Jones. He usually babysits Flynn Jones and is currently in a relationship with Dina Garcia. He can speak fluent Spanish, as seen in "Twist It Up" and "Weird It Up". He has been called "Eyebrows" numerous times through the second season.

Deuce is portrayed by Adam Irigoyen.

CeCe is one of Deuce's close friends. They both attend JHHS, where he was the first person to give CeCe and Rocky the flyer containing information on auditions for the dance show, Shake It Up, Chicago. CeCe is constantly making fun of Deuce and interfering in his love life. In "Match It Up", Deuce thinks CeCe wants to be more than friends with him and after being "rejected" by Deuce, CeCe wonders what he doesn't like about her. She used her match-making skills to set him up with his current girlfriend, Dina.

Rocky is one of Deuce's close friends. They are usually seen hanging out at school or at Crusty's. He was the first person to give Rocky and CeCe the flyer containing information on auditions for the dance show, Shake It Up, Chicago. He was upset when Rocky said she was taking the modeling job in "Model It Up", where he revealed that she's the one who maintains his eyebrows. They have a close friendship, and have hugged more than other characters do, besides Rocky and CeCe. Rocky came to Deuce for help when she needed to find a game for a poor boy during Christmas in "Jingle It Up".

Ty is Deuce's best friend. They're always together, whether it be babysitting Flynn, at school, at Crusty's where they both work, or different situations that they get themselves into. They met in the 3rd grade and became friends after Deuce bought Ty's favorite video game and invited him over to play ("Twist It Up"). The two have similar personalities. Deuce seems to admire Ty a lot, once calling him his "hero", saying that he always felt safe when he was around ("Reunion It Up"). While Deuce is currently dating Dina, Ty goes out with different girls and seems to keep Deuce posted on his love life. Deuce knew that Ty really liked Gina so he asked Dina to please try to get along with her during their double date in "Parent Trap It Up". They both got tired of the girls fighting and Ty ran after Deuce after he embarrassed himself.

Flynn and Deuce are close friends, with Deuce babysitting him several times throughout the series. They often get into crazy situations such as chasing a loose mouse in "Wild It Up" and holding a funeral for Flynn's goldfish that Deuce accidentally killed in "Reunion It Up". In "Throw It Up", Flynn tricked Deuce into blowing off the errands set by Ms. Jones and going to a baseball game instead, getting them both grounded. Deuce is easily influenced by Flynn to go off-track due to Flynn's charm and sneaky personality. Deuce has a similar personality so they easily work well together, though Flynn is seen usually out-smarting Deuce, such as trapping Deuce to a chair in chains in "Show It Up". Flynn also helped Deuce MC the talent show at JHHS, pretending to be Deuce's second head.</p>

Deuce and Tinka have only interacted with each other a few times in the series. Tinka told Deuce that he could use a little help with his hair ("Give It Up"), and they have a conversation with each other in "Three's A Crowd It Up" when he tries to sell her a Betwinkler X-96 Turbo. In "Break It Up", Deuce said he'd kiss Tinka out of all the other girls on the trip during a game of Truth or Dare. She admits to being disgusted, relieved, and offended that he chose her. When CeCe said she wanted to check on Rocky in the lake, Tinka told her "No. Don't leave me here with... Deuce."

They have talked several times but are not apparently close. In "Add It Up", Deuce bets Gunther that he can beat him in arm wrestling, but to his and Ty's surprise Gunther slams Deuce easily. Gunther beats him in all the re-matches Deuce demands, winning all his clothes (when Deuce is seen walking home, he glares at Rocky and CeCe, who were mocking him, and states "You're just lucky I won back my underwear.") Gunther and Tinka like to pick on Deuce, as seen in "Shrink It Up". Gunther calls him "Deucey".

Dina is Deuce's current girlfriend. They met in "Match It Up" and have been together ever since. Dina is described to be the female version of Deuce. They both dress alike and both sell things to other people. Dina seems to be the smarts to Deuce, as she's pointed out many obvious things to him. Like Deuce, Dina has Cuban blood in her, seeing as her father is Cuban (but her mother may be German). He has met both of her parents, Don Rio Garcia and Mrs. Garcia on different occasions and gained their trust and respect. They have the support of Deuce's friends; CeCe is the one that set them up and Rocky has said that the two are perfect for each other. Dina calls him "baby" and they are the only canon couple in the show, having celebrated their one-year anniversary in "Review It Up". In Wrestle It Up they broke up, but Deuce wanted her back, so he fought for her. After that they got back together. Dina just wanted to get back at him and make him jealous.

Deuce is described to be Rocky and CeCe's confident, resourceful and irrepressible neighbor and long time friend who helps navigate all kinds of fun adventures. He comes from a Cuban family and has stated that his father runs the "family business", which he is not allowed to know about until he is 18. Because of his family's background, Deuce comes off as sneaky, cunning, and street-smart. He also has a goofy side, especially when it comes to hanging out with his best friend Ty and his friend Flynn. Deuce can be confident at times, while at other times, he isn't very bright or brave (ex., being afraid of a mouse in "Wild It Up"). He has not had much luck with girls, but he was the only character to have a steady girlfriend (Dina Garcia). 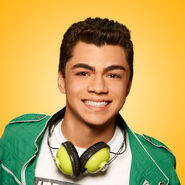 Retrieved from "https://disney.fandom.com/wiki/Deuce_Martinez?oldid=4246362"
Community content is available under CC-BY-SA unless otherwise noted.