Hulk and the Agents of S.M.A.S.H.
Avengers Assemble
Marvel Disk Wars: The Avengers
Guardians of the Galaxy
Moon Girl and Devil Dinosaur (upcoming)

Devil Dinosaur from the Marvel Comics

Bury Red Hulk like a bone, eating, being petted

Devil is slightly smarter than normal Tyrannosaurus. He has a powerful bite, immense strength, and strong legs.

In the episode "Days of Future Smash: The Dino Era", a dinosaur-dominated timeline has El Diabio, an intelligent version of Devil Dinosaur who has the power of speech and wears special armor. Alongside Spider-Raptor, El Diablo is among those who fought King Sauron's tyranny. With help from the Agents of S.M.A.S.H., El Diablo and Spider-Raptor were able to free the primitive humans and overthrow King Sauron. El Diablo managed to befriend Moon-Boy. In the past, Hulk encountered a young version of Devil Dinosaur helping defeat Leader's plot that resulted in the dinosaur-dominated timeline. Before pursuing Leader to the next time period, Hulk herded Devil Dinosaur and the other dinosaurs present to the Savage Land to keep them from going extinct. Once all that was done, the dinosaur-dominated timeline shifted to the next timeline.

Devil Dinosaur first appears in the episode "Hulk's Day Out" as a friend of Hulk. In "Westland", he is one of the dinosaurs that was placed in the Westland region of Battleworld. He encounters and attacks Vision, Rocket Raccoon, Groot, and Jane Foster, but returns as an ally in defending the town from Kree robots.

Devil Dinosaur has a cameo appearance in Guardians of the Galaxy. In the episode "One in a Million You", he appears as one of the creatures in the Collector's zoo. 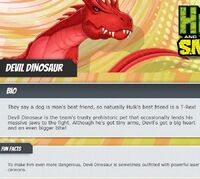 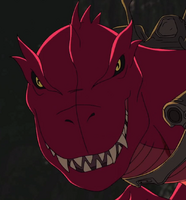 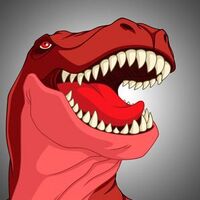 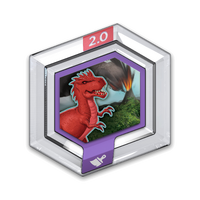 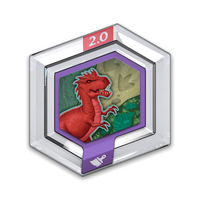 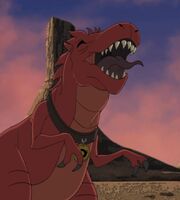 Retrieved from "https://disney.fandom.com/wiki/Devil_Dinosaur?oldid=4265717"
Community content is available under CC-BY-SA unless otherwise noted.