Angel Donald interfering, morals
Devil Donald is the bad side of Donald Duck's conscience, personified as a shiftless and practical joke playing devil.

Donald's bad side makes his first appearance in Donald's Better Self. Donald's good side persuades Donald to go to school while his bad side tempts him to go fishing. He forces Donald to smoke and making him sick until he gets into a fight with Angel Donald and got defeated.

In this wartime retread of the latter, the Devil encourages Donald to be stingy and that war bonds are a scam, while Donald's Angel says that he'll be helping the war effort by making a loan to the US government.

Devil Donald appears resuming the role of Donald's bad side. Humorously, he appears as both Donald's good and bad sides in "Labyrinth and Repeat". In "Mt. Fuji Whiz", Devil Donald turns out to be the ruler of the Underworld. He berates Baron Von Sheldgoose for letting the Three Caballeros escape the Underworld and being a terrible manager and fires him. In "Shangri-La-Di-Da", he appears as part of Donald's vision about his inability to control his anger.

Devil Donald was briefly seen on Weebo the Robot's monitor in the live-action film Flubber via archive footage from his debut short.

In Mickey's House of Villains, Donald has a very similar devil costume. 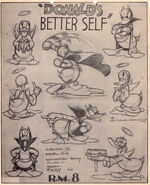 His cameo appearance in Flubber

Add a photo to this gallery
Retrieved from "https://disney.fandom.com/wiki/Devil_Donald?oldid=4554907"
Community content is available under CC-BY-SA unless otherwise noted.