Tatooine Dune Sea
Dewbacks are four-legged omnivorous, cold blooded reptiles native to the Dune Sea on Tatooine. They can be easily domesticated, made them commonly employed as beasts of burden. They can also be used as mounts. 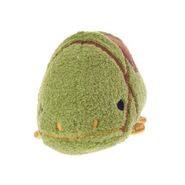 Giant Rubber puppet in the background.