Leader of the Pixie Dusters

Being bumped into, one of her Pixie Dusters almost being stepped on

Unnamed ancestors
Dewdrop is an antagonist in the 2020 Disney/Pixar animated feature film, Onward. She serves as the leader of a gang of hostile motorcycle fairies known as the "Pixie Dusters".

Dewdrop speaks in a loud, high-pitched tone. She is shown to be cold-tempered and aggressive to anyone with whom she makes contact. Whenever someone irritates a Pixie Duster member, she aggressively makes contact with the person who did it. Despite her diminutive size, she is able to ride a motorcycle perfectly alongside a whole group of Pixie Dusters.

Upon arriving in the Swamp Gas area, Dewdrop is introduced talking to a Swamp Gas customer just as she and the Pixie Dusters frighten the customer, causing him to drop his soda. As Ian and Barley enter the Swamp Gas market, Dewdrop and the other Pixie Dusters swarm the market while Ian and Barley plan to refill gas for their van Guinevere. Dewdrop then saw Mustardseed tapped by Wilden Lightfoot, infuriating her just as Ian tells her that he and his father are unaware of the sprites occupying the area.

Later while Ian is filling gas for Guinevere, he hears Barley arguing with Dewdrop where he explains that she can't fly due to magic being scarce in modern society just as Ian takes Barley away from her as their father unintentionally knocks over a few motorcycles just as she leads the Pixie Dusters to chase Ian and Barley. Ian then drives the van after filling gas for the van due to Barley's diminutive size caused by Ian earlier while she and the other Pixie Dusters chase the elves on their way to Raven's Point. During the chase, Dewdrop commands them to kill the elves but Ian presses the air conditioner button to blow away the fairies while Dewdrop and her other minions crash their motorcycle into sand barrels, causing them to fly again, causing them to escape from the Pixie Dusters while the police squadron arrives towards Ian and Barley for reckless driving.

Dewdrop is later seen taking care of an injured Pixie Duster member which crashed onto Laurel's windshield on her van after her van crashed off the road on their way to rescuing Ian and Barley. She later appears at the end of the film playing darts with the other Pixie Dusters at the newly reopened Manticore's Tavern when magic is brought back to the world once again. 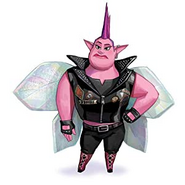