Journey Into Imagination With Figment (mentioned)

Dexter Rilley is the protagonist of a trilogy of films, beginning with The Computer Wore Tennis Shoes, followed by Now You See Him, Now You Don't and The Strongest Man in the World.

He is a student at Medfield College who goes a series of acquiring various superpowers through bizarre, unlikely means. Every year, he has to help save the college from bankruptcy, through various means of scientific inventions or discoveries.

One night, he gets struck by lightning while installing a replacement computer part and becomes a human-computer able to absorb vast amounts of information and make incredibly fast calculations.

Now You See Him, Now You Don't

Dexter is working on a formula for invisibility, but can't crack it, until a lightning storm strikes the chemicals, creating a working invisibility serum.

The Strongest Man in the World

Dexter experiments with a serum to increase the size of a scrawny cow that mixes with a super vitamin experiment of Richard Schuyler's. This ends up resulting in the cow becoming a super milk producer and Dexter gaining super-strength after putting that milk in his cereal.

Following the same plot as the original, with updated modern technological references, the film is a remake starring Kirk Cameron as Dexter Riley. 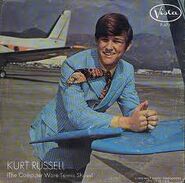 Retrieved from "https://disney.fandom.com/wiki/Dexter_Rilley?oldid=4040337"
Community content is available under CC-BY-SA unless otherwise noted.