Both are pretty clumsy, and usually obey Gordon without question. But their personalities are not known very thoroughly, as they do not speak much and have only appeared in a few episodes with supporting roles. But they do have a crazy love for the colonies, and like to sneak into the Mellowbrook cinema and cheat and annoy him enough to Kick. 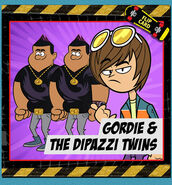 Retrieved from "https://disney.fandom.com/wiki/DiPazzi_Twins?oldid=4070365"
Community content is available under CC-BY-SA unless otherwise noted.