Doc McStuffins
"Diagnosis Not Even Close-Is"

It's another day at Doc's yard as Emmie wanted Doc to play with her and a gymnasium for her dog Rudi as later on the day, Robot Ray pops up in a super-fast-like pace as Hallie decides to find Robot Ray's problem as Stuffy tries to find the problem first as both Hallie and Stuffy both try to find the problem with Robot Ray. 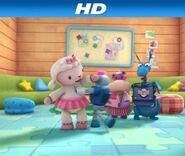