Injuries from a fall

Diane Marie Disney Miller was an American philanthropist and the daughter of Walt and Lillian Disney.

From her father's death until her own, Disney donated nearly five million dollars to various charities within the United States and devoted herself to preserving his legacy.

On May 9, 1954, Disney married Ron Miller and had seven children. In the early 1970s, the couple purchased a vineyard in Napa Valley, California. Starting in 1981 they operated the Silverado Vineyards Winery on a tract of their Napa property. Miller was CEO of Walt Disney Productions until 1984, when Diane's cousin, Roy E. Disney, supported Miller's ouster in favor of Michael Eisner and Frank Wells.

Disney was instrumental in pushing ahead with the Walt Disney Concert Hall in downtown Los Angeles. The project was initiated with a $50 million gift from her mother but got bogged down in wrangling over costs. She ensured the original design by Frank Gehry went ahead, and it finally opened in 2004.

Disney died on November 19, 2013, one month shy of her 80th birthday, at her home in Napa, California, after succumbing to injuries from a fall she suffered in September. 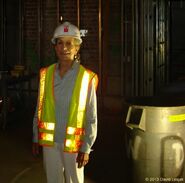