2011-present
Diane Guerrero is an American actress, voice actress, and author. She is known for her roles as inmate Maritza Ramos on the Netflix series Orange is the New Black and Lina on Jane the Virgin. Guerrero grew up in Boston and remained there after the rest of her family was deported to Colombia. She is an advocate for immigration reform. Guerrero is the author of In the Country We Love: My Family Divided, a memoir about her parents being detained and deported when she was fourteen. She also played Kay Challis/Crazy Jane on the DC Universe series Doom Patrol. 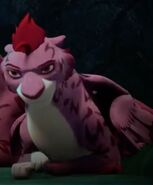 Vestia
(Elena of Avalor)
Add a photo to this gallery

Diane Guerrero speaks at the Doom Patrol panel during the 2019 Winter TCA Tour.

Diane Guerrero attending the 2020 Sundance Film Fest.
Add a photo to this gallery
Retrieved from "https://disney.fandom.com/wiki/Diane_Guerrero?oldid=3919082"
Community content is available under CC-BY-SA unless otherwise noted.