Dexter and Duke
Diane Keaton is an American film actress, director, producer, and screenwriter. She began her career on stage, and made her screen debut in 1970.

For Disney, she played Anna Dunlap in the 1988 Touchstone Pictures movie The Good Mother, Nina Banks in Father of the Bride and Father of the Bride Part II, Elizabeth Tate in The Other Sister, and Roberta Blumstein in Northern Lights. She also directed Unstrung Heroes.

She also voiced Jenny, in the 2016 Disney/Pixar animated film, Finding Dory. She was also mentioned in the The Muppets episode "Got Silk?". 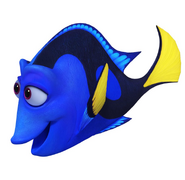 Diane Keaton behind the scenes of Finding Dory.