Diary of a Wimpy Kid

Diary of a Wimpy Kid

Greg Heffley is a scrawny but ambitious kid with an active imagination and big plans to be rich and famous – he just has to survive middle school first. To make matters worse, Greg’s lovable best friend, Rowley seems to coast through life and succeed at everything without even trying! As details of his hilarious – and often disastrous – attempts to fit in fill the pages of his journal, Greg learns to appreciate true friends and the satisfaction that comes from standing up for what is right.

Greg Heffley is about to enter middle school with his best friend Rowley Jefferson. He gets advice from his older brother Rodrick on how to "survive"; putting emphasis on avoiding the cheese touch, which supposedly makes one incredibly unpopular. Greg tries to help Rowley through adjusting, though both end up shunned by the majority of the students, mostly due to Rowley's somewhat childish antics. Nevertheless, they manage to avoid being completely at the bottom of the school hierarchy.

On Halloween night, Greg and Rowley are forced to take the former's little brother Manny with them. While at first annoyed, Greg realizes that Manny's adorable pirate costume allows them to acquire a large load of candy. Manny and Rowley become tired, but Greg insists that they continue on and take a shortcut through Snake Road, despite his mother Susan forbidding it. They encounter a trio of teenagers who begin to mock and chase them with water balloons down the road. The kids manage to evade them by tricking them into driving their truck into a ditch and make it home, only for their candy to get spoiled by Greg's father Frank when he accidentally dumps water on them and Manny outing the Snake Road incident to Susan. Greg is grounded from playing video games for a week.

While playing "tumble trike", Greg accidentally breaks Rowley's arm. Susan discovers this, but chooses not to punish Greg any further. Instead, she insists that he do the right thing and be a good friend to Rowley. Greg instead tries to take advantage of Rowley's broken arm, only to get shunned further by the other students who dote on Rowley, but villainize Greg for breaking it in the first place. Greg tries to become a cartoonist for the school paper with Rowley taking an interest in a comic he drew that depicts a character shouting "Zoo Wee Mama!", but Greg tosses it away and insists on a new one he drew. While Greg is accepted as the new cartoonist, the librarian butchers his comic, making him a laughingstock. Rowley's comic, which features the phrase, gets accepted, causing a falling out between the friends.

Rowley befriends a boy named Chirag Gupta and starts hanging out with him. To get back at Rowley, Greg decides to hang out with Fregley, an incredibly weird and unpopular boy. Greg has a sleepover at his house, but is immediately put off by his odd eccentricities. Fregley eats a candy bar that Greg had and becomes hyperactive and chases him with booger; forcing Greg to hide out in the bathroom for the remainder of the sleepover. The next day, Greg and Rowley confront each other and are ushered by the other kids into fighting, only for the trio of teenagers to return to get revenge on the boys. The teenagers force Rowley to eat a piece of the cheese and are about to force Greg to do it, but are saved by the intervention of Mr. Underwood.

The other children return to see what has transpired. To protect his friend, Greg claims that he was the one who ate the cheese, causing everyone to run from him in terror. Greg and Rowley resume their friendship as the former quickly realizes that having the cheese touch is a blessing as it forces everyone to give him and Rowley space, as well as a personal lunch table to themselves.

The film was first unveiled via Disney's 2020 Investor Day, revealing the film to be fully CGI animated and showing off test animation that reveals the art style.

A teaser poster was shown on Disney's social media accounts on September 2, 2021[1] alongside information that confirmed that Swinton Scott would direct the movie, Jeff Kinney would produce and write the movie, and that it would adapt the first book similarly to the live-action film released in 2010. Some of the voice cast was also confirmed - Brady Noon, Ethan William Childress, and Chris Diamantopoulos.

A special edition cover of the first book featuring the CG version of Greg was released on November 23 to promote the movie. In addition, the announcement picture also reveals another look at the movie's style, showing Rowley's CG design for the first time.[2]

On October 19, 2021, the film's first official trailer was released to the public, in-which it had been delayed a day prior.

On October 23, 2021, Jeff Kinney confirmed that sequels are already planned.[3]

On November 12, 2021, an animated adaptation of Rodrick Rules was announced by Jeff Kinney as part of Disney+ Day, alongside the final poster for the film.

The films' score was composed by John Paesano with the soundtrack being released digitally on December 17, 2021 by Hollywood Records and Walt Disney Records. 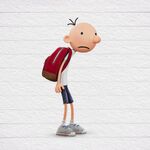 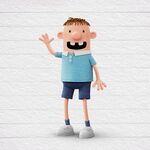 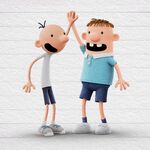 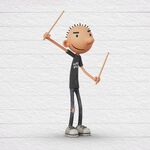 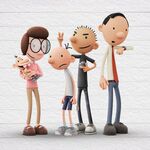 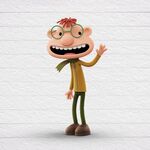 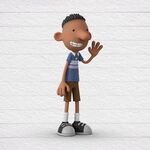