Richard Marion "Dick" Daring is the father of Todd Daring and Riley Daring and husband of Agent K.

Dick has Elvis like, jet black hair, black eyes, and fair skin. His outfit appears to be a red, white, and blue suit with a black belt around it that has a golden circle and a yellow star in the middle, along with black heeled boots.

He is the siblings' world-famous daredevil adoptive father. He is a semi-former stunt artist, and is constantly working on new tricks. His appearance resembles that of Evel Knievel. He is also rather immature, and is seen having a teddy bear known as "Evel Bearnievel". He thinks that C.A.R. is his best friend, though C.A.R. doesn't see it that way. Dick bought Riley a mule named Prince Cinnamon Boots instead of a horse like she wanted. Like Todd, Dick isn't smart at all. In "The Spy That Wasn't Riley", we learn that Dick is afraid of clowns and tries to force Todd to be a stunt man instead of a circus clown for his career. In "She Works Hard for the Movies", we learn that Dick was in a movie back in the 1970s. We also hear Dick sing his first true song; "Space Training Montage" in "Space Family Daring". It is also revealed in one episode that he is a better cook than K. 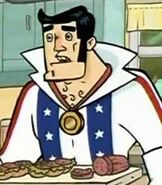 His voice picture from behind the voice actors