Scrooge McDuck, Donald Duck, Daisy Duck, Huey, Dewey, and Louie, April, May, and June, Brigitta MacBridge, Beckett, Neptunia, Olympia, Walter
Dickie Duck (original Italian: Paperetta Yeye) is the granddaughter of Glittering Goldie, who was left in the care of Scrooge McDuck. She was created by Romano Scarpa. According to Scarpa, she completed her secondary education at a boarding school, so she is possibly around 18 years old. Dickie is smart and resourceful, but can be a little air-headed. She loves pop music, modern dance and fashion.

Her first appearance was in the Italian story "Arriva Paperetta Yè-Yè" (published in the US as "The Miner's Granddaughter" in IDW's Uncle Scrooge #18). In this story, Goldie drops Dickie off because she cannot take care of her anymore, so she asks Scrooge McDuck to do it for her. But in later stories with her, she lives in her own house.

There are some Brazilian Disney comics with her as the protagonist, where she's part of a group of friends composed of Beckett (the Aracuan Bird of the movie The Three Caballeros) and original characters Neptunia (a short owl), Olympia (a tall crane) and Walter (a handsome pelican). Dickie and her four close friends possibly are studying journalism at some university of Duckburg, because of her clear connection to the reporter career, which was shown in various comic stories. Despite these spin-off stories taking place in Duckburg, they do not include appearances of other characters from the Donald Duck-themed comic books or animation.

Despite the character's success in Brazil, she stopped being used by Italian authors who considered her too tied to a '60s teenager social context that does not exist anymore (the term "Yeye" in her original name indicate a type of music very popular in Italy in the '60s). To keep using the character, she was still used in some Donald Duck-themed takes on classic literature. Recently, Dickie has resurfaced in Italian Disney comics as a reporter, occasionally seen working in the County Conscience, Scrooge's younger brother Gideon McDuck's newspaper.

Dickie's only animated appearance was in the '80s in the opening sequence of the kid show Topolino Show, animated by her creator Romano Scarpa. 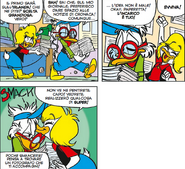 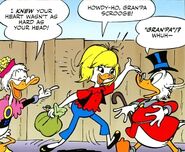 Scrooge meets Dickie for the first time.
Add a photo to this gallery

Retrieved from "https://disney.fandom.com/wiki/Dickie_Duck?oldid=4243793"
Community content is available under CC-BY-SA unless otherwise noted.